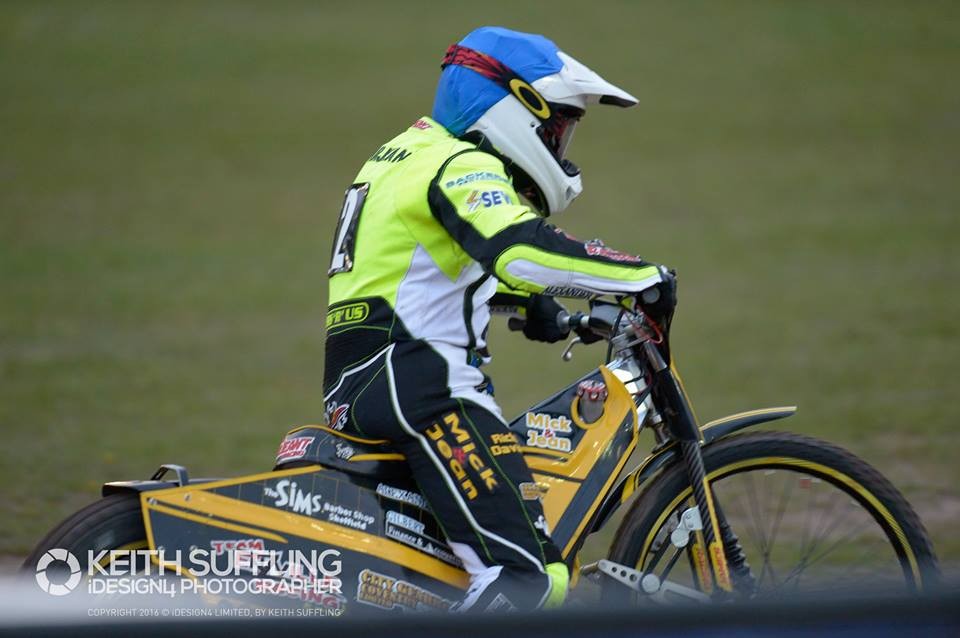 The ‘Tru7.com’ Witches suffered a disappointing 53-37 defeat at bottom of the table Scunthorpe Scorpions on Sunday.

The Witches started the meeting well but faded away as the meeting went on and ending up losing heavily. James Sarjeant enjoyed a good night scoring nine for the away side.

The first heat was shared as Ryan Douglas took the win for the home side with the Witches pair of Sarjeant  and Danny King in second and third. It was the same in heat two as the home man Michael Palm Toft was awarded the win after his partner Josh Bailey fell on the last lap. The Witches went ahead in heat three as Nico Covatti beat Lewis Kerr to the flag and Morten Risager passed Alex Davies to get third on the back straight of the final lap. Heat four was full of passing as Josh Auty was determined to get the win passing his partner Bailey and Ben Barker on the first lap before getting past Ollie Greenwood at the start of lap two. Barker and Greenwood ensured it would be another shared heat though leaving the Witches 13-11 up.

The Witches increased their lead in heat five as Sarjeant stormed to victory and the skipper King got past Kerr on the final lap for another 4-2 to the away side. It was all level again after heat six though as the home side recorded a 5-1. Carl Wilkinson passed Barker at the front at the start of lap two and was joined by partner Douglas on lap three as Barker and Douglas fought it out with the home man coming out on top for the maximum. It was more of the same in heat seven as Auty and Palm Toft roared to another 5-1 to give the Scorpions the lead. It was another heat advantage to the home side in heat eight as Wilkinson beat Sarjeant with Bailey in third to give the Scorpions a 27-21 lead.

Barker and Davies went toe-to-toe in heat nine with the Witches man coming out on top to take the win with Jacobs in third for a heat advantage that reduced the home side’s lead. Covatti was excluded in heat 10 as he fell on the first turn and the Scorpions took full advantage in the re-run recording a 5-1 courtesy of Douglas and Wilkinson. Auty’s fine form on the night continued in heat 11 as he passed King on bend two of the last lap and then took Sarjeant on the last bend to prevent a Witches advantage. Davies won heat 12 ahead of Jacobs and Covatti for another 3-3 which left the Witches with a mountain to climb 40-32 down with three to race.

The meeting was won in heat 13 as Auty swooped round two riders on the third bend of the second lap to take the win with Douglas in second for a 5-1 that sealed victory. Kerr won heat 14 after swooping from third to first on bends three and four of the first lap in a shared heat.

The Scorpions put the cherry on top in heat 15 as Auty and Douglas eased to a maximum and completed their own personal maximums in a 53-37 win.

Team Manager Ritchie Hawkins was at a loss to the Witches’ collapse after a strong start.

“A third of the way through the meeting we had no last places and we were four up and looked good,” said Hawkins. “From then on they (Scunthorpe) were much better than us. It’s hard to know how after such a good start it can go so wrong but it did.”

It was another frustrating night of inconsistency throughout the side but Hawkins was pleased with Jacobs’ debut for the club.

“The bottom end did their job well and Joe had a good debut, he was a positive note from a bad performance, he did well but the top end struggled tonight.”

Despite the defeat the boss says the team will fight until the end for a play-off spot at the end of the season.

“Its another meeting where we haven’t picked up points but while we can still mathematically make the play-offs we’ll still be going for it. We’ve got to get a result somewhere away from home where maybe people are not expecting us to. The meetings are running out but while we can do it we are still going for it.”