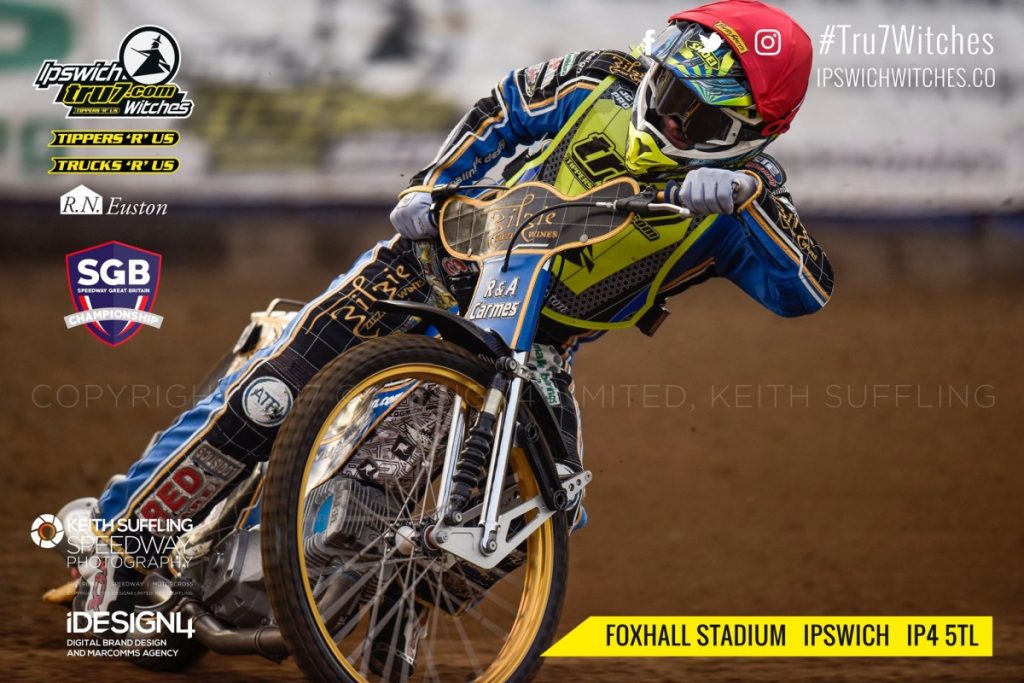 The ‘Tru7.com’ Witches round off the week with a visit to Scunthorpe Scorpions on Sunday in the Championship (5.30pm).

After a rain off at Foxhall On Wednesday, the Witches travelled to Sheffield on Thursday and suffered another postponement as the rain failed to stop on the night with riders and management eager to get out on track.

The Witches are at full strength for the meeting. The home side hand a debut to Tero Aarnio who replaces Stefan Nielsen at reserve after the former Witch suffered a broken collarbone in a crash at Foxhall last week. The home side also have Ryan Douglas back in the side after he withdrew from the meeting at Foxhall last week after a bad fall in heat three. Sheffield’s Kyle Howarth replaces Michael Palm Toft who has a sickness bug.

The Witches were dominant in victory at Foxhall last week but went home empty handed on their last visit to the Eddie Wright Raceway after a 53-37 defeat in 2016.

Team Manager Ritchie Hawkins says the team are keen to get on track after two rain offs and says it will be a tougher test than at Foxhall.

“We are really keen to get racing at Scunthorpe,” said Hawkins. “They tried hard to get Thursday on at Sheffield but the rain never eased. If it had everyone was ready to go but it never did and it was the right decision to call it off.

“It will be a lot harder on Sunday than it was at home but we have got to go there looking to get a win.”

The boss says the Eddie Wright Raceway is one the Witches riders will relish but highlighted the importance of taking something away from the meeting to keep in the play-off positions.

“It’s normally good racing at Scunthorpe and it’s another bowl type track and it’s enjoyable to race on. Our boys will up for it having done a lot of laps around there.

“We want to keep the momentum going after three wins in a row and Scunthorpe have lost four times at home already, so if we don’t get anything out of it we are dropping points behind other teams that have gained something there.”