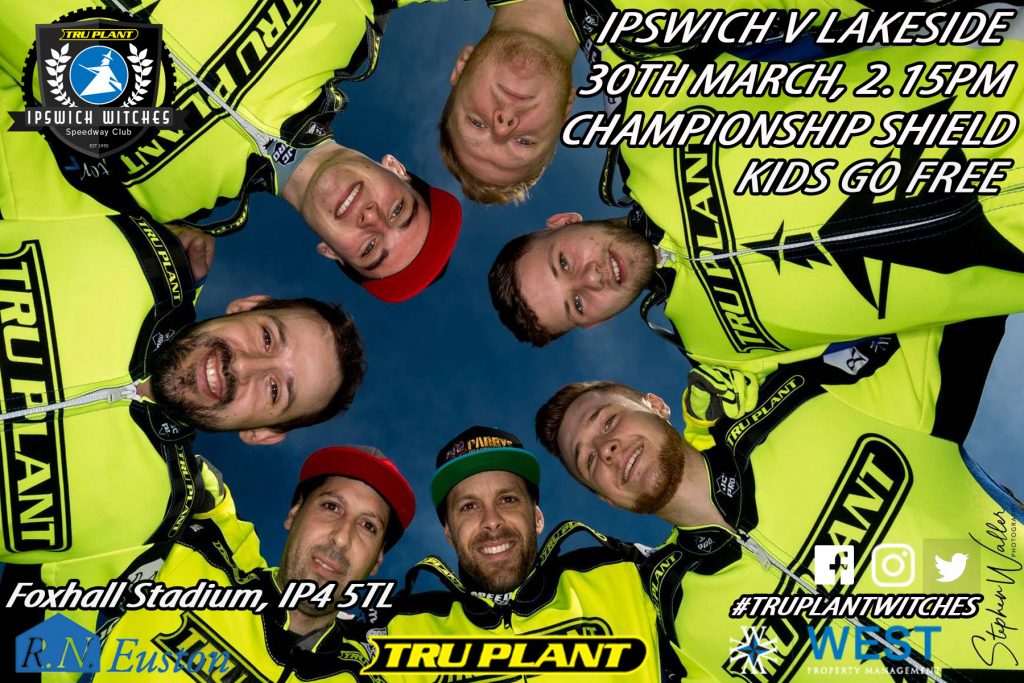 The ‘Tru Plant’ Witches begin the 2018 campaign with a home fixture against Lakeside in the Championship Shield on Good Friday. The action kicks off at Foxhall from 2.15pm and the two sides were then due to face each other in the evening at the Arena-Essex Raceway but due to the bad weather forecast the Lakeside promotion have decided to postpone the fixture. After coming so close to silverware in 2017 the Witches return with six members of the side that started the previous campaign with the addition of young German rider Michael Härtel.  The Witches have struggled to get on the Foxhall track to practice due to the recent bad weather and can afford no slip-ups at home in the group stage format of the Championship Shield.

The Essex side have made the step up to the Championship in 2018 after competing in the National League in 2017. After many years competing in the Premiership prior to last year, the Hammers begin the new season much fancied by many to compete for silverware. Richard Lawson captains the side after several seasons at Glasgow in the Championship and 2017 Premiership title winner Nick Morris is at number one. Former Witch Adam Ellis also rides at number three.

2017 Witch Kyle Newman makes an immediate return to Foxhall after playing his part in the side that came so close to two trophies last year. Newman is sure to get a warm welcome and his time with the club last season makes him a threat to the home side.

“It’s a late start to the year being Easter and usually we have had a couple of meetings under our belt but hopefully we will have good weather and carry on from last year really.

“I think Michael enjoyed press day and spending some time in Ipswich with everyone. He fitted in really well and the other six riders are all friendly and welcoming, so we have made him feel at home. It will take a little bit of time for him to settle on the track and to get used to British speedway so we need to give him time.

“They boys have struggled a bit to get out on track ahead of Friday but most of them have been out at Scunthorpe to practice the other day and have been on track this week. Half the boys will have hopefully have raced some competitive meetings this week with the weather being well. It is not a huge concern but the first meeting of the season always has the potential to be a banana skin. We need to go out and do a professional job.

“You would hope the crowd would be good on a Bank Holiday and coming off the back of the big crowds last year and the atmosphere around the club, everyone seems to be excited about the team. It helps the team as well as they love riding in front of the massive crowds.

“We want to win trophies and the Championship Shield is the first opportunity to win something. We need to make a good start and get through that group. With there only being three teams and four meetings, you can’t afford any mistakes.”

Friday will be the first time the Witches take to track this season whilst the Hammers kicked off their season by claiming a point at Peterborough on Sunday, losing 46-44 in the Championship Shield group stage.

The last time these two sides met in Suffolk was back in 2010 in the Elite League where the Witches came from 12 points down to win 49-43. Current Witches captain Danny King scored 14+1 and was backed up by 14 from Linus Sundstorm at reserve. The late Lee Richardson was the away side’s top man on the day scoring 11.