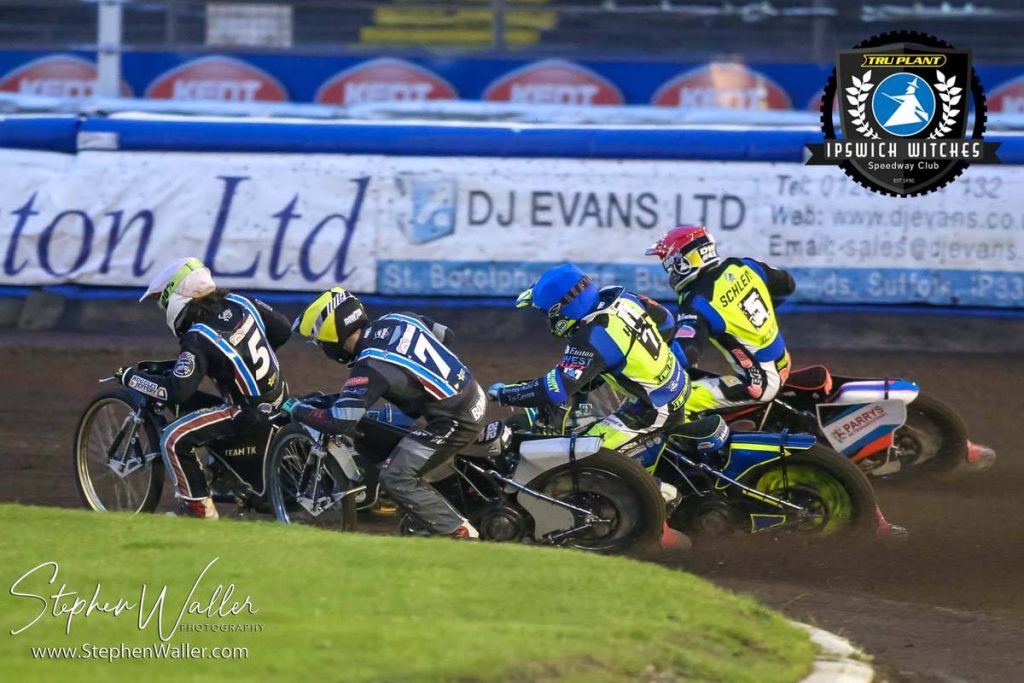 The ‘Tru Plant’ Witches endured a nightmare evening at Foxhall on Thursday as they crashed to a 54-35 defeat in the first leg of their Knockout Cup tie with Lakeside.

It all went wrong in heat one for the home side as Michael Härtel got out of shape and crashed into skipper Danny King. King was looked at by paramedics and was withdrawn from the meeting and taken to hospital with an arm injury. That left the home side with just five riders to complete the meeting and the away side were in total control throughout building a big lead for the second leg on Friday. Cameron Heeps top scored with 14+1.

Heat one was stopped with the Hammers at the front but Härtel got into trouble and hit King on the second turn of the second lap as the race was stopped. King was withdrawn from the meeting with an arm injury as Härtel was excluded from the re-run, meaning the Witches were down to five riders using rider replacement and injury rider replacement. Rory Schlein came in to replace King and showed his class immediately to pass Nick Morris and take the win in the re-run. The Hammers pair of Max Clegg and Alfie Bowtell made the gate in heat two but Connor Mountain managed to pass Bowtell on the second lap to split the pair as the away side took an early lead. A bad start got worse for the home side in heat three as Adam Ellis and Kyle Newman recorded a 5-1 to extend the visitors’ lead. There was no catching Richard Lawson in heat four as he beat Schlein with Bowtell picking up a point to make it 16-8 to the away side after just four heats.

Cameron Heeps gated and won in heat five as Härtel was in third for the Witches’ first heat advantage of the night. Lawson bagged his second win of the night in heat six with Heeps and Mountain both in the points for a 3-3. An uphill task became even harder after heat seven as the away side hit their second 5-1 of the evening thanks to Ellis and Newman once again. Heat eight was called back after Mountain and Ben Morley both hit the deck on the first turn with all four called back for the re-run. The re-run was also halted as Bowtell fell going into the first turn again but all four were called back. Heat eight was eventually completed and it took a fine ride from Heeps to take the win but with Mountain at the back it was a 3-3 leaving the away side 29-19 up.

Lawson was proving a hard man to beat as he won his third heat of the night in heat nine in another shared heat that suited the away side as they maintained their 10-point lead. The away side took another step towards victory on the night as Ellis followed Lawson’s lead by winning his third heat on the trot in heat 10 as Danyon Hume kept Newman behind him limiting the Hammers to a 4-2. Morris rode well to pass Schlein on the second turn of the second lap and win heat 11 and with Morley in third the meeting looked all but over for the Witches. Heeps was having a good night and won heat 12 ending Ellis’ chance of a maximum with Hume in third for a home 4-2 but the away side were in full control leading 42-30.

The Witches were a beaten side and salt was rubbed into the wounds in heat 13 as the visitors recorded a 5-0 thanks to Morris and Lawson with Schlein retiring and Hume crashing. The home side didn’t give up though and Härtel won heat 14 with Mountain in third for a battling 4-2. Schlein missed the two minutes for heat 15 and was replaced by Mountain but nothing could stop the away side from hitting another 5-1 to round the night off and take a 54-35 win in the first leg.

Scott Properties Rider of the Night 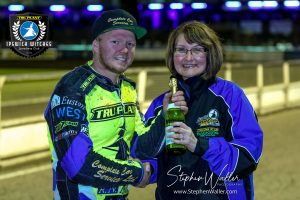 Cameron Heeps was the sponsors Rider of the Night after clocking up 14+1 as he kept on battling throughout despite the difficult circumstances.

It all went wrong for the home side in heat one with Härtel crashing into King and the captain being withdrawn from the meeting, leaving the Witches with five riders to complete 15 heats. The injury knocked the wind out the home side who kept battling but the away side took full advantage to record a big win.

The ‘Tru Plant’ Witches are back in action on Friday 4th May for the second leg of this Knockout Cup clash against Lakeside.