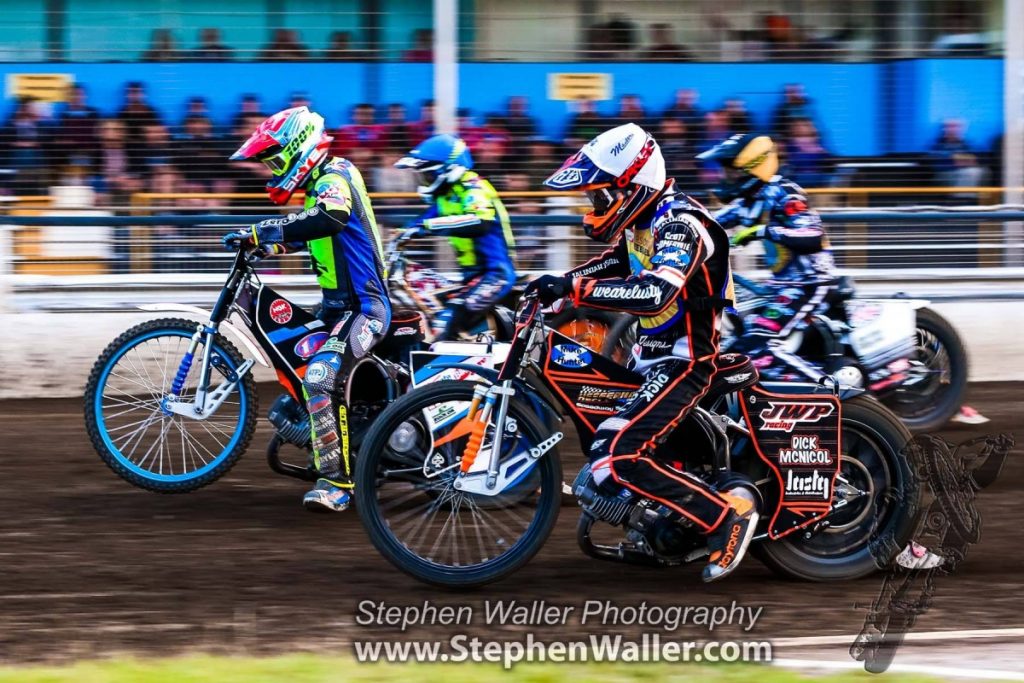 The ‘Tru7.com’ Witches produced a stunning turnaround to beat league leaders Edinburgh Monarchs 50-39 in the Championship at Foxhall on Thursday.

The visitors had the better of the early exchanges and it looked bleak for the home side when Nathan Greaves was withdrawn from the meeting after heat four with the Witches two down. However, a mid-meeting turnaround saw the Witches record three 5-1’s on the trot as they stormed to victory. Danny King top scored with 12.

Mark Riss was given a warning in heat one after an unsatisfactory start as King won the re-run in his usual fashion but Cameron Heeps couldn’t get amongst the points despite his best efforts at the back. Max Clegg won heat two ahead of the Witches pair of Nathan Greaves and Connor Mountain as nothing separated the two sides in the early stages. There was another warning dished out in heat three by referee Chris Gay as Kyle Newman was the recipient on this occasion. The visitors looked set for a 5-1 in the re-run as Erik Riss and Josh Pickering hit the front but the latter fell on the final lap as the Witches breathed a sigh of relief. Greaves took a heavy fall on the first bend of heat four but dusted himself down for the re-run as all four were called back. Ricky Wells won ahead of Rory Schlein with Mitchell Davey picking up third for a Monarchs 4-2 and an 11-13 lead to the away side.

Justin Sedgmen seemed to be in control of heat five but like Pickering fell on the last lap with the race awarded as a 3-2 to the Monarchs after Mark Riss had also fallen in the race, leaving Sam Masters to take the win ahead of Kyle Newman. King made it two from two in heat six as he beat Wells and Heeps picked up third for a 4-2 to the home side. The Witches were hit with the news that Greaves could take no further part in the meeting after his heat four crash, leaving the home side up against it. Erik Riss won heat seven as Schlein passed Pickering for second to split the away pair and limit the heat advantage to a 4-2. The home side responded in fantastic fashion in heat eight though as Heeps won and was followed home by Mountain for a 5-1 to give the Suffolk side a 24-23 lead.

The home side were digging deep and recorded another vital 5-1 in heat nine thanks to Sedgmen and Newman to give them a five point lead and some breathing space. The superb turnaround continued in heat 10 as King and Heeps roared to another maximum as the home side fought hard to preserve their unbeaten home record. The points were shared in heat 11 as Schlein took the chequered flag. Sedgmen won heat 12 in a 3-3 to leave the Witches in a strong position, 40-31 up with three heats to go.

King’s chances of another home maximum went in heat 13 as he went through the tapes and was forced to go off 15 metres. The skipper fell on the first turn of the re-run leaving Schlein as the sole home representative. The Australian took it in his stride and produced a fine ride to seal the win. The Witches number five was at the back after the opening lap but got past Wells coming out of the second bend of the second lap. Schlein then set his sights on Masters and hit the front going into the third lap and hung on for the win to the delight of the Foxhall faithful. Pickering won heat 14 but Newman and Mountain were both in the points for a 3-3. And the home side ensured the league leaders left empty handed as King won heat 15 with Schlein third for a 4-2 to leave the final score 50-39 to the Witches.