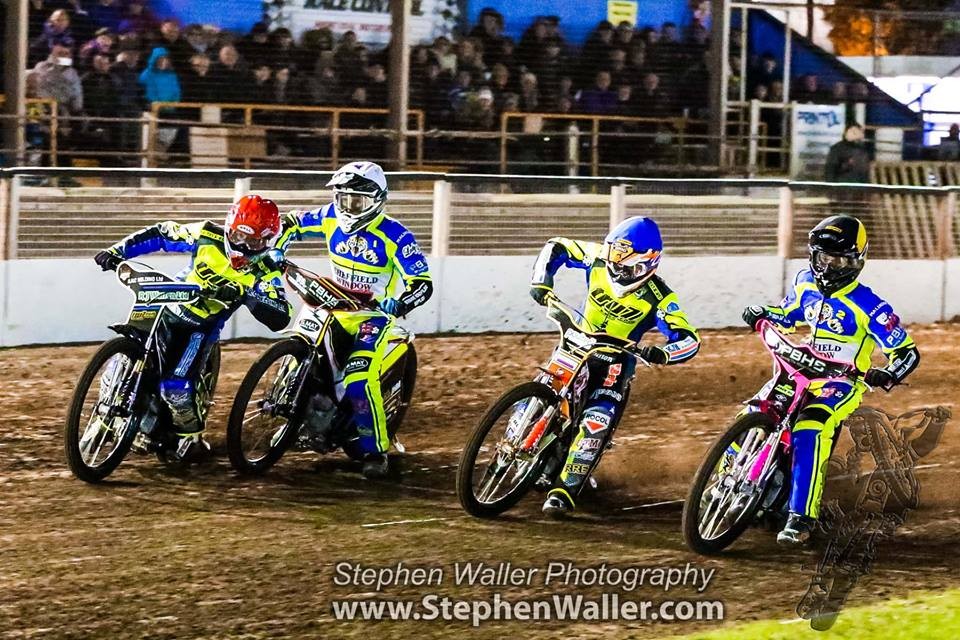 The ‘Tru7.com‘ Witches kicked off the 2017 Championship season in style with a 52-41 win over Sheffield Tigers in front of a big Foxhall crowd.

The home side looked convincing throughout, despite the absence of the injured Kyle Newman, until the visitors gave themselves hope with a tactical ride mid-meeting but the Witches responded well and eased to victory with captain Danny King reeling off a five-ride maximum.

King was quickest out of the gate in heat one as he continued his 2016 form into the new season with the Tigers pair of Josh Bates and Josh Grajczonek ensuring a shared heat to open proceedings. Danyon Hume got the crowd off their feet early on as he nipped up the inside of Rob Branford on the back straight on lap one and powered to victory with Connor Mountain holding off Jack Parkinson-Blackburn for third to give the Witches an early 4-2. Heat three was action packed as Lasse Bjerre led with Nico Covatti hunting him down. The pressure was too much for Bjerre as he fell going into the third turn on lap three with Covatti and Cameron Heeps taking avoiding action and laying their bikes down. The heat was awarded as a 5-1 to the home side. Rory Schlein won convincingly in heat four ahead of Kyle Howarth with Hume picking up a point for another heat advantage and a 16-8 lead.

The early Witches dominance continued in heat five as Covatti beat Grajczonek with Heeps in third for another heat advantage. King won heat six as Hume fell early on but picked the bike up to allow the captain to romp home to victory. The Tigers got their first heat advantage of the night as Bjerre claimed three points but Schlein worked hard to pass Todd Kurtz for second and prevent a 5-1. Schlein was back out again in heat eight and he and Hume raced to a 5-1 to give the home side a 30-18 lead.

The Tigers sent captain Howarth out on a tactical ride in heat nine and the Sheffield man led with Covatti chasing but sadly the Witches man fell going into the third turn on the second lap and was excluded from the re-run. Howarth produced the goods again in the restart and was followed home by teammate Branford for an 8-1 despite the best efforts of Heeps to split the pair. However, the Witches responded immediately as King continued his superb night and Heeps forced his way past Kurtz to join the British champion at the front for a 5-1. Schlein won heat 11 as the points were shared before Bjerre was first across the line in heat 12 for another 3-3 leaving the Witches 42-33 up.

Heat 13 needed to be restarted after an unsatisfactory start but the Witches pair of King and Schlein sealed the victory with a 5-1. Branford held off Heeps in heat 14 with partner Kurtz in third for a late heat advantage for the away side. King completed his perfect night in heat 15 after he battled past Howarth with a traditional swoop round the outside to give the Witches a 52-41 win and send the Witches faithful home happy.

We would like to apologise for the problems experienced regarding the PA system this evening, this will be rectified for Thursday’s meeting.

Rider of the Night: Danyon Hume