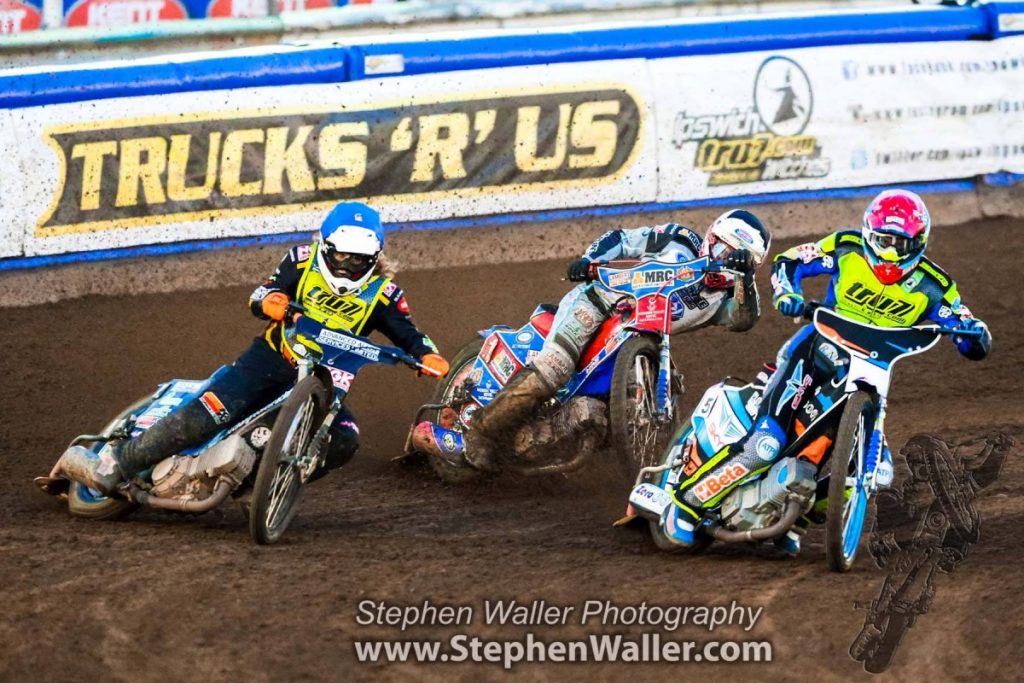 The ‘Tru7.com’ Witches continued their 100% home record in 2017 with a 53-39 win over Newcastle Diamonds to take them second in the Championship table.

The home side made a strong start to the meeting and kept the visitors at arm’s length throughout before a strong finish put the result in no doubt. Danny King top scored with 11.

There was a slight delay to the start of the meeting after referee Barbara Horley was taken ill with Mark Styles taking over refereeing duties. Styles was called straight into action and excluded Ashley Morris after the visiting rider fell on the second lap of heat one. The Witches took advantage in the re-run as King and Cameron Heeps roared to a 5-1 to get the meeting off to the perfect start. The home side made it two from two in the following heat as Nathan Greaves and Connor Mountain both passed Connor Coles on the first lap to take the maximum with Coles falling late in the race. The visitors hit back in heat three though as Ludvig Lindgren and Lewis Rose recorded a 5-1 of their own. Ben Hopwood was a faller on the second lap of heat four and was excluded with the race to be re-run. There was an unsatisfactory start in the re-run but at the third attempt Rory Schlein won ahead of Steve Worrall meaning a 4-2 to the Witches and a 15-9 lead.

There was a further delay as the paramedics saw to Schlein who was carrying a knee injury but the Australian was passed fit to carry on. In heat five Robert Lambert was a winner ahead of Justin Sedgmen but Kyle Newman fell whilst in third on the third lap with the race awarded as a 4-2 to the visitors to narrow the gap. There was another delay to proceedings as heat six was brought back with King warned for moving at the start. Worrall won the re-run ahead of the Witches skipper with Heeps third in the first shared heat of the night. Despite injury Schlein came out to win heat seven as the teams shared the points again. The Witches restored their early eight point lead in heat eight as Heeps won with Greaves joining his teammate at the front for a 5-1 to make it 28-20 to the home side.

Worrall won heat nine in a 3-3 as the visitors kept within striking distance going into the business end of the meeting. Rose hit the deck on the first turn in heat 10 and was excluded from the re-run and would take no further part in the meeting due to the injury sustained. Heeps continued his fine form on the night with a win in the re-run with King in third to extend the lead to ten points meaning the away side could use their tactical ride. And the visitors did just that in heat 11 with Lambert coming out in the black and white helmet but he could not beat Schlein and with Greaves somehow staying on the bike after a scare for third it meant a 4-4. The home side wrapped up the win in heat 12 as Sedgmen won his first heat of the night with Mountain in second for a 5-1 to make it 44-30 with just three heats to go.

King was at his classy best in heat 13 as Schlein pulled up on the first lap meaning a 3-3. Newman finished his night with a big win in heat 14 as Mountain picked up third for a 4-2 making it 51-35 with just heat 15 remaining. Lambert won the final heat ahead of King who passed Worrall for second on the second lap as Heeps fell at the back making the final score 53-39 to the Witches.