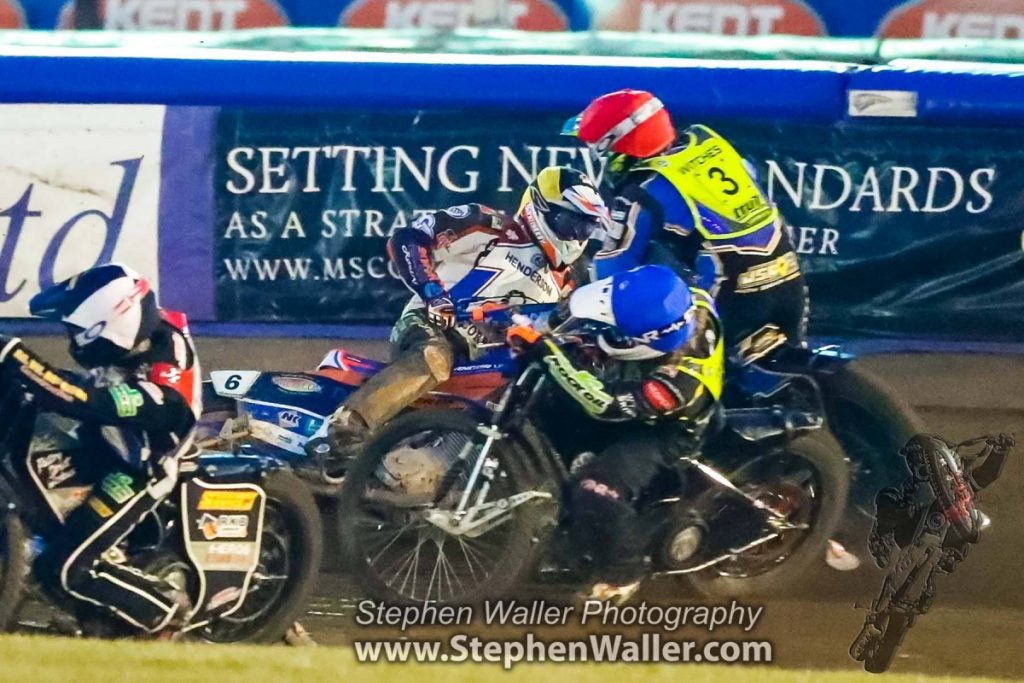 The ‘Tru7.com’ Witches hammered a depleted Scunthorpe Scorpions side 59-32 on Thursday evening at Foxhall in the Championship to go joint top of the table.

The Scorpions were up against it after heat three when Ryan Douglas was withdrawn from the meeting after a bad crash and with rider replacement in operation already for the away side it left the visitors with just five riders. The result was never in doubt after that as the Suffolk outfit showed no mercy in a dominant display. Danny King and Rory Schlein both scored 11+1 paid maximums.

King got the night off to a good start by winning heat one as Cameron Heeps passed Stefan Nielsen to take third early in the race for a 4-2. The away side hit back immediately in heat two as former Witch Stefan Nielsen eased to victory as Witches debutant Nathan Greaves passed Josh Bailey to take second on the second lap. There was a nasty incident in heat three as Ryan Douglas lifted from the start and went over the handlebars which left Kyle Newman with nowhere to go other than straight into Douglas. Douglas was excluded for the incident and was ruled out of the rest of the meeting with injury. In the re-run Witches duo Justin Sedgmen and Kyle Newman raced to the first 5-1 of the night to re-take the lead early on. Rory Schlein won heat four ahead of Josh Auty as Greaves picked up third for another heat advantage to make it 15-9 after four heats.

Sedgmen and Newman hit their second 5-1 of the night in heat five to extend the lead further as the Scorpions could only field one rider. The home side were in fine form and made it two maximums on the trot as Heeps and King were fastest from the gate and did not look back in heat six. Schlein made it two wins from two as the Scorpions prevented a further heat advantage in heat seven. Nielsen was a faller on the first turn in heat eight and was excluded from the re-run to add to Scunthorpe’s woes. Teammate Bailey then fell in the re-run leaving Greaves and Heeps to an easy 5-0 and leave the Witches well in control and 33-14 up.

Sedgmen got his third win of the night in heat nine ahead of Nielsen as Auty and Newman traded blows on each other lap by lap with the visiting rider winning the battle to take third meaning a 3-3. Lewis Kerr made the gate in heat 10 but locked up with King colliding into the back of him. Both riders stayed on the bike but Kerr was excluded as the night went from bad to worse for the away side. King and Heeps made the visitors pay in the re-run with another 5-1. Schlein was another Witch on a maximum after his win in shared heat 11 meaning the Witches had sealed victory on the night. Kerr was sent out on a tactical ride in heat 12 but there was another crash as Nielsen locked up on the first turn and again it left the Witches man Sedgmen with nowhere to go but into the back of the away rider. Nielsen was excluded and withdrew as Sedgmen did not take his place in the re-run. Kerr won to give his side six points ahead of reserve duo Greaves and Connor Mountain making the score 47-27 to the home side.

King and Schlein both completed paid maximums in heat 13 as they hit a 5-1 with the Witches totally dominant. Scunthorpe’s dismal night was complete in heat 14 as their sole representative Bailey fell and was excluded leaving Newman and Mountain to complete a second 5-0 of the evening in the re-run. Kerr was a winner again in heat 15 ahead of Heeps with Michael Palm Toft passing Greaves for third for a Scorpions 4-2 to end the night and leave the final score 59-32 to the Witches.

Next Meeting: C2 Wednesday 17th May vs Sheffield (home)