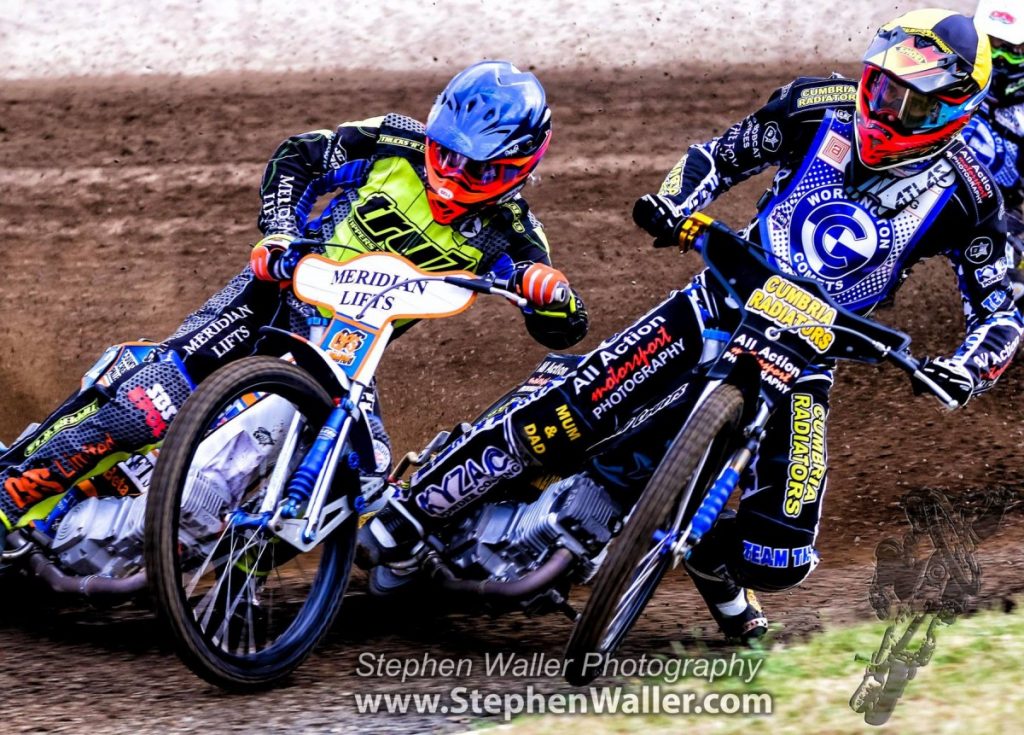 The ‘Tru7.com’ Witches hammered the Workington Comets 59-33 at Foxhall on Thursday in the Championship.

The Witches dished up a dominant display from the off on a night of entertaining racing in Suffolk. The home side raced into a big lead early on and never looked back with Kyle Newman recording a paid maximum with 13+2 from five rides.

It was a superb start to the meeting for the home side as Danny King and Newman kept the new British champion Craig Cook back in third for an opening heat 5-1. On his return to Foxhall, James Sarjeant touched the tapes and went off 15 metres in the re-run of heat two. The re-run was eventful as Sarjeant passed both Witches riders but had already been excluded from the race having been adjudged to have jumped the start again, meaning another 5-1 to the home side courtesy of Connor Mountain and Nathan Greaves. Cameron Heeps won heat three and it looked like being another maximum for the home side until Ty Proctor passed Justin Sedgmen on the final lap to limit the Witches to a 4-2. Rory Schlein was fastest in heat four with Thomas Jorgensen passing Greaves on lap two but it was another heat advantage, giving the home side a healthy 18-6 lead.

Things were not going to plan for the visitors who sent out Cook on a tactical ride in heat five but the Great Britain captain didn’t make the two minute time allowance and was forced to go off 15 metres. The Comets captain made a good start in the re-run and swooped around his partner and Sedgmen on the third bend of the first lap but couldn’t catch Heeps out in front meaning a 4-4. King won heat six and he was joined by Newman at the front after the Witches man passed Sarjeant on the fourth turn later on in the race to give the home fans another maximum to cheer. Schlein got his second win of the night in heat seven in the first 3-3 of the evening. Mason Campton was the next visiting rider to hit the tapes in heat eight and the home side punished the visitors again as Newman and Greaves recorded another 5-1 for a 35-15 lead.

The Comets were not learning their lesson and in heat nine Jorgensen was the next visiting rider to jump the start and go off 15 metres in the re-run. Sedgmen won the second attempt ahead of Sarjeant with Heeps picking up a point for a 4-2 to extend the lead further. Newman won heat 10 with King following him home as the Witches continued to batter their opponents. The visitors did get a 5-1 in heat 11 though as Schlein’s engine blew going into a hard first turn, leaving Cook to take the win as Campton made a pass into second to record a maximum. Proctor won heat 12 but Heeps passed Sarjeant on the third lap to take second as the visitors restored a little pride but the meeting was won with the home side 47-27 up.

Jorgensen was withdrawn from the meeting and replaced by Sarjeant in heat 13. It was the home side’s turn to go through the tapes this time as King jumped the gun and went from 15 metres in the re-run. Schlein put his mechanical gremlins behind him with a fantastic ride to beat Cook as they traded positions during the four laps in a shared heat 13. Sedgmen won the penultimate heat as Mountain picked up third for a Witches 4-2. Newman completed a paid maximum with a win in heat 15 as Schlein and Cook produced one of the battles of the season as they passed and re-passed each other before the home rider eventually made it stick to end the night on a 5-1 making the score 59-33 to the Witches.

Rider of the Night: Cameron Heeps

Next Meeting: C1 24th June vs Glasgow (away)