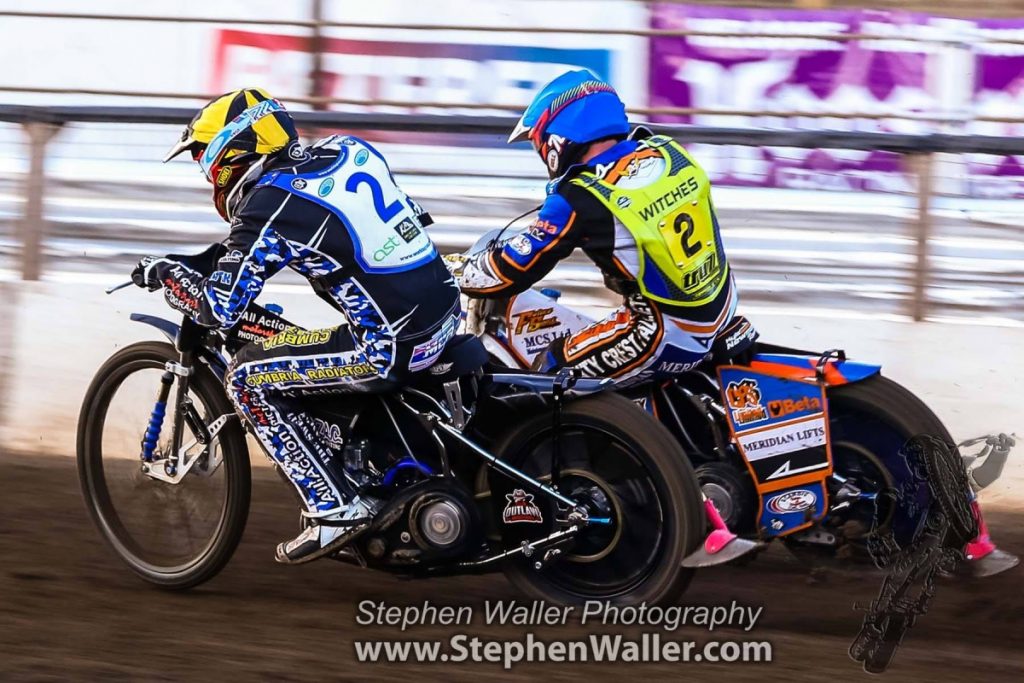 An injury hit ‘Tru7.com’ Witches endured a difficult evening at Redcar as they went down to a 55-38 defeat on Thursday night in the Championship.

The visitors kept things tight after the opening four heats but three consecutive 5-1’s from the home side put them firmly in control of the meeting. Rory Schlein won a tactical ride for a 6-3 but the away side never looked like taking anything from the meeting as the Bears comfortably won on the night to move into the top four. Schlein top scored with 15 as the Witches remain second in the table.

Things did not start well for the Witches as the home side roared to a 5-1 with Kevin Doolan retiring with bike troubles. Tobias Busch won heat two but Connor Mountain and James Sarjeant were both in the points for a shared heat. Kyle Newman got the first Witches win of the night in heat three but it was another 3-3 with Doolan unable to get amongst the points. Rory Schlein made it two Witches wins in a row but it was another share of the spoils leaving the home side 14-10 up.

The home side recorded their second 5-1 of the night in heat five as Jonas B Andersen won and Ben Barker won the battle for second after a tussle with Danny King. Things were getting worse for the visitors as the home side hit another 5-1 in heat six thanks to Barker and Ellis Perks who kept Schlein behind them for the maximum. The trend continued in heat seven as Busch and Charles Wright were the next pairing to record a 5-1. Schlein was sent out in the black and white helmet in heat eight which he duly won for a 6-3 to the Witches but the away side still had work to do, being 32-19 down.

Schlein was back out again in heat nine and was a winner again as the points were shared. Barker won heat 10 as Newman held second ahead of Perks with a 4-2 meaning the home side were closing in on victory. There was a good tussle for first in heat 11 as Wright and Newman swapped places throughout. The Witches man took the lead on the second lap only for Wright to pass him on the final turn of the race to take the win in a shared heat. Sarjeant led for the Witches in heat 12 but was passed by Andersen on the third lap as the Bears recorded a 4-2 to put them 46-29 up with three races to go and the meeting won.

King got his first win of the evening in heat 13 in a shared heat. Bears guest Mitchell Davey was awarded the win in heat 14 after his partner Andersen fell late in the race whilst third, meaning a shared heat. Barker rounded off a good night with a win in the last heat ahead of Schlein and Newman, leaving the final score 55-38.