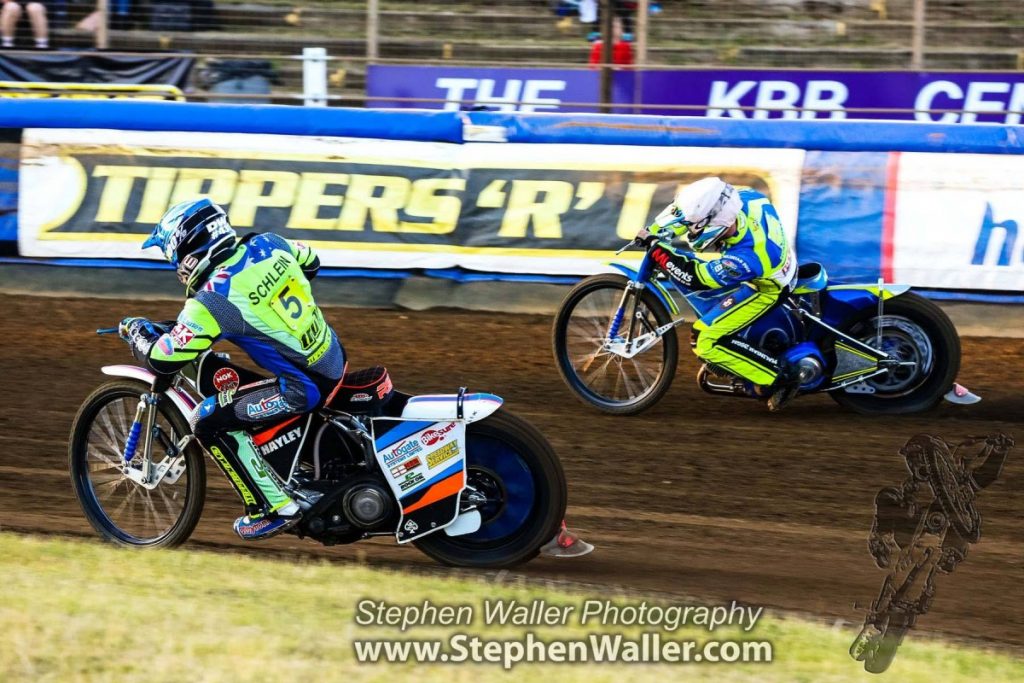 The ‘Tru7.com’ Witches went down 52-38 to Sheffield Tigers on Thursday night in the Championship having led with four heats to go.

There was nothing to separate the two sides throughout the night as the top two went toe to toe and the Witches edged ahead with a 5-1 in heat 11. However, the hosts finished with four consecutive 5-1’s to take the win and seal top spot at the end of the regular season. Rory Schlein top scored with 9.

Sheffield reserve Jan Graversen won heat one ahead of Mark Riss and Danny King in shared heat to start the evening. Graversen was back out in heat two and won again as partner Georgie Wood followed him home for a 5-1 with Nathan Greaves packing up at the start line. Home guest Lewis Kerr suffered mechanical issues in heat three but teammate Lasse Bjerre took victory in a 3-3. Heat four was called back as Wood was warned for moving at the start. Connor Mountain and Rory Schlein were quickest from the gate but home skipper Kyle Howarth passed the Australian on the second lap but couldn’t find a way past the Witches reserve meaning a Witches 4-2 to make it 13-11 to the Tigers.

Kyle Newman won heat five ahead of Bjerre with King picking up third after Kerr had more mechanical trouble at the start, with a 4-2 to the visitors levelling up the scores. Josh Grajczonek won heat six but partner Graversen couldn’t get amongst the points meaning a 3-3. Howarth won heat seven but once again the Witches pair of Newman and Riss ensured the points were shared. Graversen led early on in heat eight but Schlein flew past the home rider to take the win as the points were shared again leaving it all square at 24-24.

It looked like being another 3-3 in heat nine as Schlein led but Bjerre eventually found a way past on the final lap to win with Kerr picking up third to put the home side ahead. Riss won heat 10 holding off Grajczonek for the win but Newman retired at the back meaning it was back to the 3-3’s. However, the Witches then edged ahead on the night as King and Mountain stunned the hosts with a 5-1 in heat 11. The Tigers hit back in heat 12 though and recorded a 5-1 of their own thanks to Bjerre and Graversen to give them a 37-35 lead.

The home side then put themselves on the brink of victory with another 5-1 in heat 13 courtesy of Howarth and Grajczonek. The win was sealed in heat 14 as Graversen and Kerr hit a third 5-1 on the trot after Newman had packed up whilst in second on the final lap. The run of 5-1’s continued in the final heat thanks to Grajczonek and Howarth making the final score 52-38 to the home side.