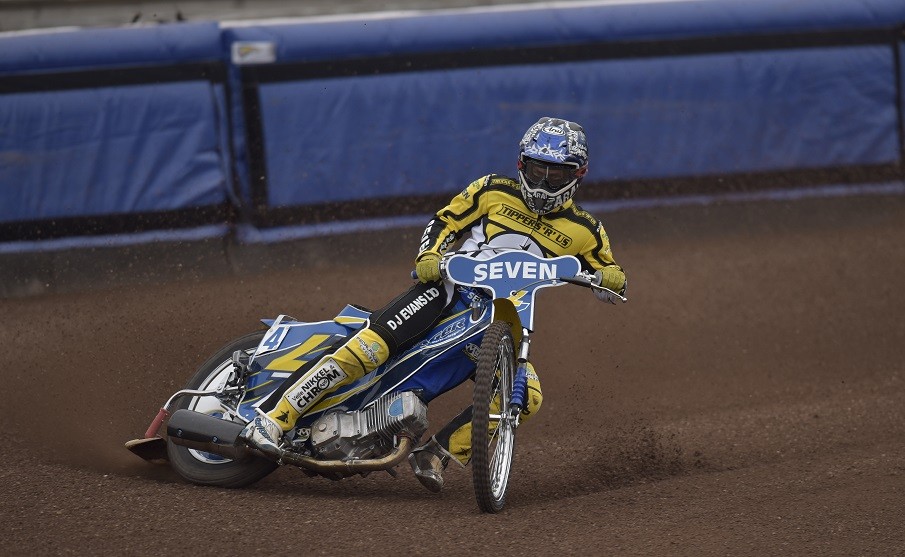 The ‘Tru 7.com’ Witches started the home Premier League campaign in disappointing fashion after the Somerset Rebels were victorious at Foxhall, taking a 48-42 win on the night.

The Witches had started brightly but there was nothing between the two sides throughout the meeting until the away side came on strong towards the latter stages and came out on top of a last heat decider to take the win. Captain Danny King top scored for the Witches with 12.

It was at the third time of asking that heat one was completed after King and James Sarjeant went down in first bend bunching at the first time of asking. The second attempt was stopped after Sarjeant was moving at the start. However, King finally got the Witches off to a positive start taking the win with Sarjeant in third for a 4-2. Visiting reserve Bradley Wilson-Dean won heat two with the Witches duo of Darryl Ritchings and Paco Castagna picking up second and third for a 3-3. Heat three was a contender for heat of the season. Rebels duo of Charles Wright and Paul Starke made the gate but Morten Risager bided his time before passing Starke on the last lap and then snatching the win on the line after getting past Wright to ensure a 3-3. Nico Covatti flew from the gate in heat four to take the win and leave the Witches 13-11 up after four heats.

The scores were level after heat five though after Josh Grajczonek won from the tapes but Risager was at it again passing Jake Allen to prevent a Rebels 5-1. King won from the gate in heat six to keep the scores level but the away side took the lead in the following heat as Starke and Wright gated and the chasing Covatti went too wide and slid off meaning a maximum to the visitors. Sarjeant won heat eight to leave the Rebels 26-22 up with seven heats to go.

It was all level again after heat nine though when Lewis Kerr gated and took the win with partner Risager following him home for a 5-1. It looked like the Rebels would re-take the lead in the following heat but King had other ideas rounding the Rebels pair to keep the score level. The away side did re-take the lead in heat 11 though when Covatti had a nasty looking crash after clipping the fence on the back straight before ending up on the centre green. Thankfully the Italian was up and ok but the visitors gated in the re-run for a maximum. Kerr was a winner again in heat 12 but it was a share of the spoils in the heat leaving the Witches up against it being 38-34 down with three heats to go.

It looked all over after heat 13 when the away side recorded another 5-1 when Grajczonek and Rohan Tungate gated and kept the chasing King at bay. However, the Witches stayed alive in the tie when Risager and Castagna gated and the Italian kept Starke at bay for the 5-1 meaning the Witches needed a final heat 5-1 to take a draw with the score 40-44 to the away side.

Sadly it was the visiting pair of Grajczonek and Tungate who made the gate and despite King pipping Tungate on the line it meant the Rebels took a 48-42 win away from Foxhall.

Witches Director of Speedway Chris Louis couldn’t hide his frustration with the defeat saying the team need to channel their nerves into more focus.

“It was how we started our League Cup campaign and that cost us a place in the semi-finals in my opinion,” said Louis. “I’m very disappointed to start our Premier League campaign in the same manner. Again, like the Scunthorpe meeting though I don’t think we are second best at home against Somerset. You can pinpoint slight things like Nico crashing when that should have been a heat advantage, as it should be round the first turn. At the end of the day though as a team we seem more nervous still than focused and we need to switch that around and when we do I think we are a competitive side home and away but we have to re-group after tonight and go to Somerset.”

Louis struggled to find many positives from a disappointing night at Foxhall but says it is not down to a lack of effort from the team.

“Paco continued his slight improvement and Morten racing wise was good although we don’t want that at the expense of his starting ability which is generally his strong point. Lewis is still learning about the Jawa set-up and he needs to stop worrying about that and start focusing on what he does best and he did in the end with two race wins and he needs to carry that on and not have to wait one or two rides and I think he learnt a bit tonight.

“I can’t find any positives from tonight, it was a mismatch of a lack of focus and they are nervous. It’s not a lack of effort, I’m not knocking the team but they need to turn their nervous energy into focus which is difficult. When you talk to any sportsman it’s a fine line between negative nerves and positive nervous energy that you can focus and they’re not managing to do that at the moment. Thankfully with Danny’s last turn effort we’ve managed to stop them taking full points. It doesn’t mean we get anything but ultimately if its them we are battling with at the end of the year that point might be handy.”

Next Meeting: 29th April vs Somerset Rebels (away)