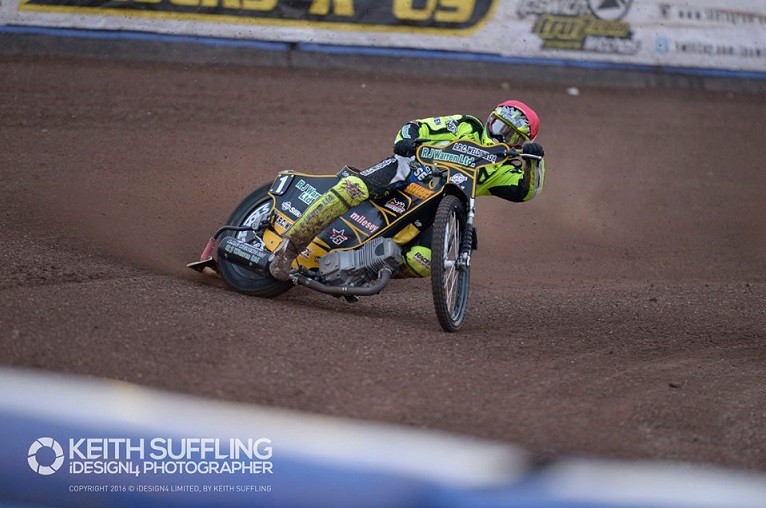 The ‘Tru7.com’ Witches got their first Premier League points of the season after narrowly beating champions Edinburgh 48-45 at Foxhall.

The Witches had been steadily building a healthy lead throughout the meeting before a tactical ride got the Monarchs back in it and a late 5-1 to the away side meant the meeting went to a last heat decider. Top scorer Danny King won heat 15 to ensure the Witches took the win, taking his tally to 12 for the night.

Monarchs skipper Sam Masters won the opening heat of the night beating King to the flag in a shared heat. Heat two was full of confusion. Max Clegg led the race for the visitors with Paco Castagna challenging him at the front whilst Ollie Greenwood and Daniel Bewley were battling it out for third. Bewley came under the Witches man and knocked the new signing off on the first bend of the third lap. Referee Dave Robinson put the blue exclusion light on for Greenwood  to the bewilderment of the whole stadium before then putting the white exclusion light on for Clegg who led the race.  Eventually Bewley was excluded as the referee found the right button to press. Clegg then jumped at the start in the re-run meaning a third attempt of heat two. Clegg appeared to jump again in the third attempt but the referee let it go as he eased to victory. Morten Risager won heat three with James Sarjeant in third to give the Witches the first heat advantage of the night. Heat four was another re-run after an unsatisfactory start as Nico Covatti won ahead of Ryan Fisher with Greenwood holding off Bewley for another 4-2 to the Witches.

Masters won heat five but Sarjeant prevented a heat advantage to the Scottish side after he cut back up the inside of Clegg on the home straight at the start of the final lap to take third. The Witches added to the lead as King won heat six with Lewis Kerr in third in the quickest time of the night (57.0). Covatti won heat seven as Castagna got up the inside of Jye Etheridge on the fourth bend of lap two to take third and further increase the lead. Kerr won heat eight with ease but it was to be a 3-3 as Clegg passed Greenwood on the second bend of the third lap to take third, leaving the Witches 28-20 up.

Fisher won heat nine in another shared heat but heat 10 had to be re-run after Kerr fell on the fourth bend of lap one whilst at the back. King came out and won the re-run to prevent any heat advantage to the champions though. The Witches looked to be heading for a comfortable victory as Covatti became the first man to beat Masters on the night in heat 11 with Castagna in third for yet another 4-2 that put the Witches 38-28 up. The Monarchs reacted in the following heat sending out Kevin Wolbert out on a tactical ride which he duly won to give the Monarchs a 6-3 heat advantage, their first of the meeting.

The Monarchs were right back in the tie after heat 13 though. Covatti fell in the first turn after first bend bunching but the Monarchs pair of Masters and Fisher flew from the gate in the re-run to record a 5-1 and close the gap to just three points. Sarjeant tried everything in heat 14 to get past Clegg at the front but couldn’t find a way past meaning a 3-3 which would take the meeting to a last heat decider.

King was the victim of first bend bunching in the first attempt of the final heat but the skipper dusted himself down and flew from the gate in the re-run to win ahead of the Monarchs pair and ensure the Witches took a narrow 48-45 win.

Team Manager Ritchie Hawkins was pleased with the desire his side showed in a tough situation and praised the captain’s last heat performance.

“I’m really pleased with their heart, we stuck in there and didn’t crumble,” said Hawkins. “When you’re having a tough time that can easily happen. I thought we were really solid for the first 11 heats, even heat 12 as that would have been a 3-3 too if it wasn’t a tactical ride. We kept knocking in the 4-2’s, they had one big heat and the double points and it pulled them back into it. It was a massive ride by Danny in heat 15, he stepped up like a number one and a captain like we needed him to.”

The boss says he is certainly not getting carried away after a victory and admits the results have not been good enough so far this season.

” It’s three points on the board but I’m disappointed that Edinburgh took one point away from it. I know that neither team can get through in Sunday’s League Cup clash at Peterborough, so it is a dead rubber in a sense but for us it isn’t.

“With the form that we have been in we need to go there and improve and put in a big performance. To win at home by three points against a weakened Edinburgh team is not good. We are certainly not getting carried away and thinking everything is rosy because there was inconsistency there and there are areas to improve. I’m happy with their heart though and their will to win which got us there in the end.”

Hawkins says he is intrigued to see how the new riding order get on but was delighted with new signing Greenwood’s debut.

“I think it will be good to see the riding order on Sunday, so the jury is still out on that but I was happy with Ollie’s debut.

“He’s turned up with really nice bikes and I had a long chat with him and his attitude seems brilliant. He’s fit in with the boys straight away, he’s not just been sat there on his own and he has mingled in well and he will fit in straight away. He rode well for his debut, I think he can do a lot better but he is learning the track and I’m really happy with him and it’s all positive. He was unlucky not to get his fourth ride but he had a problem with his bike in his third ride and with it getting tight I couldn’t afford to risk putting him out when we weren’t sure of the result.”

Next Meeting: LC 22nd May vs Peterborough