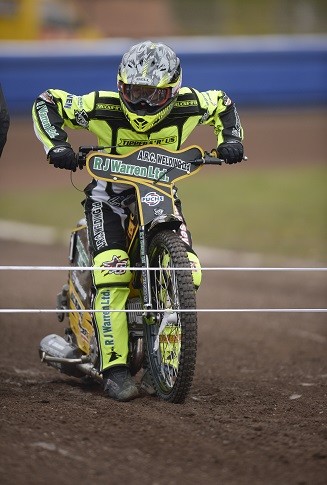 The Ipswich ‘Tru7.com’ Witches claimed an away point at Sheffield Tigers on Thursday evening in a narrow 47-43 defeat but it wasn’t enough to keep their League Cup hopes alive.

The Witches needed to avoid defeat to stay in the competition and it was nip and tuck throughout the encounter before the home side built up an eight point lead during the second half of the meeting that sealed the win and their progress into the next round. The Witches claimed a point their performance deserved led by captain Danny King who scored 13+1.

The evening started off in perfect fashion for the Witches as King and James Sarjeant raced off to a heat one 5-1 but the Tigers re-paid the compliment in heat two to even things up. Lewis Kerr was in good form to win heat three with Morten Risager holding off Josh Bates at the back for a Witches 4-2. The scores were evened up again in heat four though as Jason Garrity won from the gate with Nico Covatti working his way around Nathan Greaves into second to prevent a Tigers maximum leaving it finely poised at 12-12 after four heats.

The Witches were not lying down though and re-took the lead in heat five with King passing Kyle Howarth on the way to victory with Sarjeant in third for a 4-2. The ding-dong battle did not stop there with the Tigers responding with their own 4-2 the following heat after Dimitri Berge held off a strong challenge from Covatti who almost got the Frenchman on the line. The first shared heat of the night came in heat seven as the Witches pair of Kerr and Risager gated on a 5-1 but the Dane fell on bend three on lap one leaving Kerr and Garrity to battle it out at the front in a superb race that the Witches man won. The home side took the lead as Berge won heat eight ahead of Sarjeant who had passed Greaves on lap two, leaving the score 25-23 to the Tigers.

Covatti won his first heat of the night from the gate in heat nine as the points were shared before the home side recorded a 5-1 in heat 10 courtesy of Simon Stead and Berge. King was in impeccable form again and won heat 11 but Sarjeant was passed by Richard Hall in third to prevent a Witches heat advantage. The Tigers closed in on victory in heat 12 when Howarth won ahead of Darryl Ritchings as the heat was awarded after Kerr had fell trying to pass Greaves in third on lap three leaving the score 40-32 to the home side.

The Witches ended how they had started with a 5-1, this time thanks to Covatti and King, who passed Howarth to join the Italian at the front and claim a point for the Witches in a narrow 47-43 defeat that leaves the Witches out of the League Cup.

Team Manager Ritchie Hawkins was keen to take the positives out of the performance and says things are going to plan at the early stage of the season.

“It’s improvement again,” said Hawkins. “We’re obviously disappointed not to get more out of the meeting as we needed to avoid defeat. There are lots of positives though, the boys are starting to ride better like we know they can and it’s going to plan really. We knew it would take time and it would take a few meetings to get going and that is what is happening.

“The general improvement is the main positive, it was ten times better than at Rye House and the spirit is coming too. I was also pleased with Darryl’s improvement throughout the meeting. There were a couple of falls when trying to win races and I said to Morten; if he falls when trying to win a race I’m never going to criticise him and the same with Lewis. It is what it is and it was great to see them racing out in the dirt.”

Paco Castagna endured another tough evening and the manager sympathises with the Italian but says it is down to the rider himself to get through this tough spell.

“It’s hard with Paco, he’s going to have to be really mentally strong to pick himself up and go again on Saturday. He’s got to ride through it, it’s a tough game speedway, I’ve been there struggling and I know what he is going through but it’s up to him to pull himself around and ride through it.”