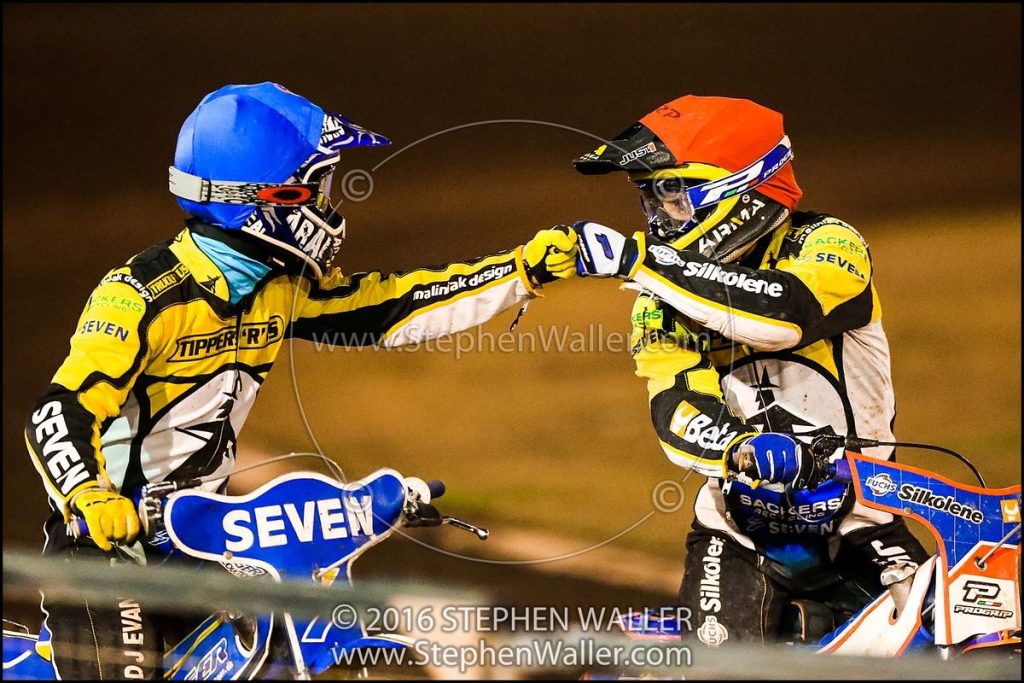 The ‘Tru7.com’ Witches put in a nerveless display to beat the Newcastle Diamonds 52-41 at Foxhall and secure their spot in the Premier League Play-Offs.

The home side knew a win would secure a top six finish and they led from start to finish despite the visitors having success with a tactical ride mid-meeting. Danny King led by example scoring 12 points for the Witches.

It was a similar start to the last home meeting as Steve Worrall went straight through the tapes in heat one and went off 15 metres in the re-run. King dominated as he usually does in the restart with James Sarjeant picking up third for an early heat advantage. It was Joe Jacobs’ turn to break the tapes in heat two and he also went off 15 metres in the re-run. Ashley Morris made the gate in the second attempt of the heat and was comfortable at the front as local rider and guest Scott Campos was doing well in second.  Jacobs worked his way into third getting past Danny Phillips on the back straight of the second lap but sadly Campos got into trouble on the last lap and fell on the first turn, meaning a heat advantage to the Diamonds. Morten Risager swooped round everyone in the first turn in heat three to hit the front and his partner Nico Covatti produced a trademark move round the outside to pass Matej Kus on the third and fourth turn. Lewis Kerr won heat four for the visitors as Ben Barker slotted into second with Phillips third for a 4-2 to the away side leaving the score tight at 13-11 to the Witches.

Worrall won heat five in the first shared heat of the night before mechanical gremlins hit the Witches in heat six. King and Sarjeant looked to be heading for a 5-1 before the captain suffered an engine failure whilst out front meaning another 3-3. Barker took the win in heat seven with Jacobs third to extend the lead to four points. The away side looked like levelling the scores in heat eight as Victor Palovaara and Phillips made the gate but Sarjeant worked hard to get past Phillips on the home straight going into the third lap and Phillips then fell on the final lap allowing Jacobs into third for a shared heat leaving the score 26-22 to the home side.

Things were looking more comfortable after heat nine as Covatti and Risager eased to a maximum and in heat 10 the Witches took a big step towards the win after another 5-1 courtesy of King and Sarjeant. The 12 point lead forced the Diamonds to put Worrall on a tactical ride in heat 11 which he duly won despite Barker’s best efforts with Palovaara in third for a 7-2 to get the away side back in the meeting. Kus and Morris looked to be heading for a 5-1 in heat 12 but Covatti was at it once again going round Morris on the third and fourth turn to split the pair and limit the damage to a 4-2 and leave the Witches with a slender 40-35 lead.

King was magnificent in heat 13 as he raced to another win with Barker in third for a 4-2 that edged the Witches towards the finishing line. Risager was the hero in heat 14 as he won to seal the victory on the night after he held off Ludvig Lindgren who had passed Jacobs for second. King finished the night in fine style after he wound it on to fly round Kus on the second bend of the second lap to take the win with Risager third for another heat advantage that left the final score 52-41 to the Witches.

Team Manager Ritchie Hawkins says the side have now achieved their first target and believes the hard work starts now.

“It was a big performance in what was always going to be a tough meeting,” said Hawkins. “We’ve achieved our first goal of making the play-offs and now we’ve got to re-group and get ready for a big few meetings now.

“I’m delighted with our upturn in form, we look like a really good team and round Foxhall we are riding exceptionally. It’s not a case of ‘we’ve made the play-offs that’s a good season’ because we are a massive club and need to be fighting for honours. There’s a no pressure meeting on Sunday which will be nice for the boys and then the pressure is back on next week.”

The boss says he never lost faith in his side during the season and is determined to lead the Witches to the title this season.

“I’ve always had full faith in the ability of the riders we have. We made changes and they were good changes at the right time. I’ve always been focused and have always been the one saying we can make it and as long as the boys have all understood we can still make it all year, no matter what other people have been saying around us, that is what has mattered. I think as a unit we’ve stayed focused on that and with the form we are in now it’s not a case of thinking ‘happy days we’ve made it’, now the real season starts.”

Next Meeting: PL 18th September vs Newcastle (away)