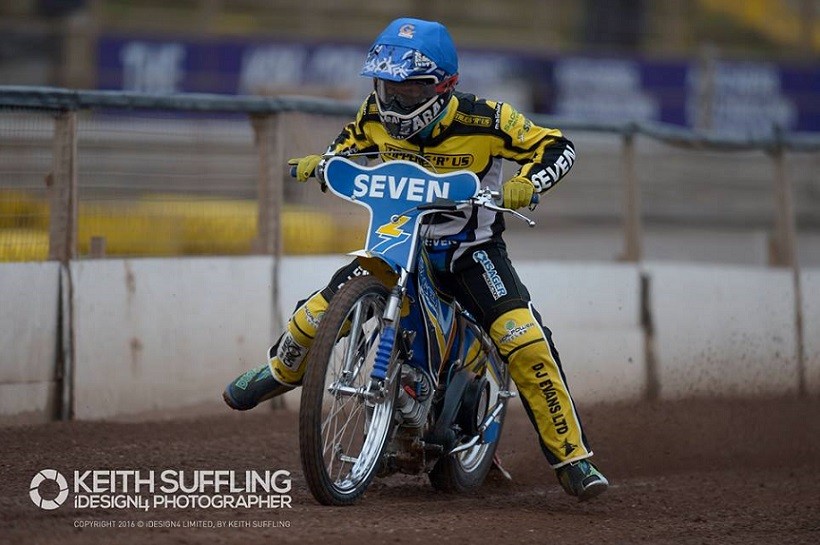 The ‘Tru7.com’ Witches Knockout Cup hopes for 2016 ended with a whimper as they fell to a 53-37 defeat at Rye House, going down 97-83 on aggregate on Saturday evening.

The Witches kept things tight in the early stages but a strong mid-meeting from the home side put things to bed and the Rockets cruised to a comfortable victory.  Morten Risager was the Witches’ top performer with 11.

Things started badly for the Witches after James Sarjeant was excluded for not making the two minute time allowance after not having his dirt deflector on. Paco Castagna replaced Sarjeant as Edward Kennett won ahead of Danny King with Castagna holding third until he was passed by Kasper Lykke on the back straight on the third lap. Danyon Hume was making his debut for the Witches replacing Darryl Ritchings, due to his partner going into an early slow labour earlier that day. Hume’s nerves got the better of him as he went through the tapes in heat two and had to go off 15 metres. Castagna won for the Witches and Hume was well on the pace nearly catching Ben Morley for third. It was another shared heat in heat three as Cameron Heeps won ahead of the Witches pair of Risager and Lewis Kerr. Nico Covatti won heat four as Hume tried to battle past Ben Morley at the back but had no joy meaning another 3-3 leaving the Witches 13-11 down.

The run of shared heats was broken in heat five though as Leigh Lanham and Heeps romped home to a 5-1 to the Rockets. The first staging of heat six was stopped after an unsatisfactory start . In the re-run Lykke steamed down the inside on the back straight of the first lap to lead with Covatti battling with Kennett going into the third bend but the Witches man went too wide and fell and was excluded. Castagna could do nothing to prevent another 5-1 to the Rockets in the re-run. The Witches pulled a couple of points back in the next heat as Risager won with Kerr in third cutting the deficit to eight points. It was Morley’s turn to go off 15 metres in heat eight after going through the tapes as Lykke took the heat win head of Castagna but Morley managed to catch the field up and pass Sarjeant in third on the third lap up the back straight before Sarjeant fell on the first bend of the final lap. After eight heats the Witches were 29-19 down with it all to do.

The task got harder as Heeps and Lanham raced to another 5-1 in heat nine and it was all but over in heat 10 as Kennett won and his partner Lykke got past Risager on the back straight of the third lap to join him for another maximum. King won an awarded heat 11 after Sarjeant fell on the first bend of the third lap meaning a 3-3 which confirmed the Witches exit from the competition. Kerr won heat 12 from the gate as the Witches recorded a heat advantage with Castagna in third having been passed by Heeps on the fourth bend of the first lap.

Kennett completed another maximum in heat 13 winning ahead of King with Stuart Robson in third as the Rockets extended their lead. Lanham won the penultimate heat of the night ahead of Risager and Hume claimed a deserved point getting past Karger on the fourth turn of the first lap with Karger then falling at the back on the second bend of the second lap.

Risager won heat 15 as Lykke passed King going into the third bend of the first lap for second place and the Witches 4-2 made the final score 53-37 to the home side who progress to the next round to face Berwick.

Team Manager Ritchie Hawkins was disappointed with the side’s exit from the competition sighting the home leg and inconsistency as key factors in the defeat.

“Obviously we made it really tough for ourselves when we lost a lead on Thursday,” said Hawkins. “It’s just not clicking for everyone at the moment. Guys who had a good night on Thursday didn’t have a good night tonight and the ones who didn’t go so well on Thursday did better tonight. It’s frustrating and we are all trying our hardest, the effort is there and everyone has got to stick in there and get their heads up and try our best.”

Hawkins admitted he is worried by the current form but remains confident the team can turn things around as the sole focus is now on the Premier League.

“I still have faith in their abilities and I’ve no doubt they will turn it around but we need it soon and I’m a strong believer if we keep doing the right things it will click but as a team we need it to happen now.

“We’ve got to get ourselves going now and make a push for the play-offs. The league has only just started and we’ve got a long way to go in that and we are more than capable of still making the play-offs and then getting ready and in good form for the play-offs. We start that on Thursday against Edinburgh at Foxhall.”

Next Meeting: Premier League 19th May vs Edinburgh (home)