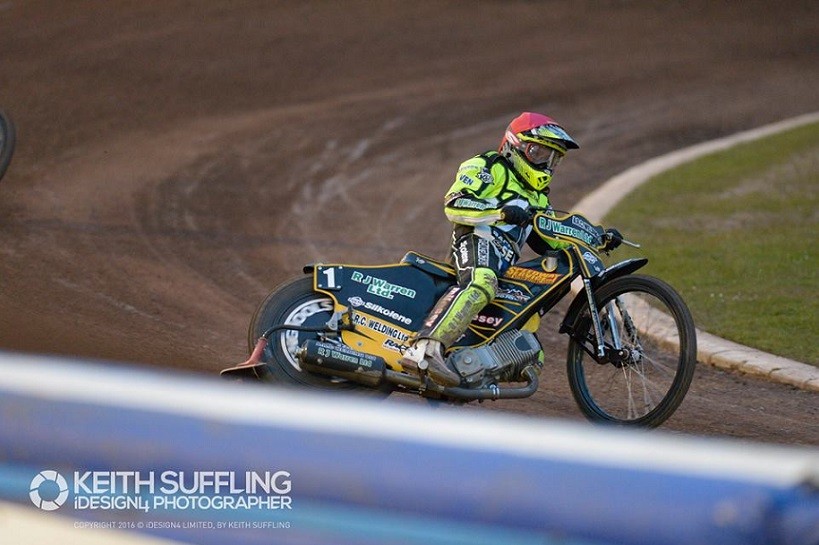 The ‘Tru7.com’ Witches were beaten convincingly at the East of England Showground on Monday as they went down to a 56-36 defeat to Peterborough.

The hosts were dominant from the off and the result was never in doubt as the Witches failed to reproduce the promising performance that ran the Panthers close just over a week ago. Danny King top scored for the Witches with 12.

Things started badly for the Witches as the home side recorded a 5-1 in the opening heat thanks to Craig Cook and Emil Grondal. Simon Lambert won heat two for the Panthers but the Witches pair of Paco Castagna and Ollie Greenwood took the minor placings for a shared heat. The Panthers strong start continued in heat three as Kenneth Hansen and Grondal recorded another maximum. The bad news kept on coming for the Witches as Greenwood was harshly excluded as the primary cause of the stoppage in heat four as both Witches men fell on the second bend of the first lap after being pushed wide by Luke Chessell in the first turn. Nico Covatti was ok to take part in the re-run but could not prevent Ulrich Ostergaard taking the win as the Panthers recorded a 4-2 to leave the Witches ten behind.

Team Manager Ritchie Hawkins reacted in heat five sending out King on a tactical ride but the skipper could not prevent Hansen recording another win. With Lewis Kerr in third the Witches did at least record a 5-3 heat advantage. However, the home side responded in heat six as Cook and Lambert hit another 5-1 to the home side. The home captain Ostergaard took the chequered flag in heat seven but Morten Risager and James Sarjeant ensured it wasn’t another home advantage. It was one way traffic though as the home side raced to another maximum in heat eight thanks to Hansen and Lambert. The Witches pair of Kerr and Greenwood made the gate but were passed by Hansen before Lambert picked both away riders off to take second on the line leaving the Witches 33-17 down after eight heats.

Covatti got the Witches’ first heat win of the night in heat nine as Castagna held off Hansen at the back to give the away side a heat advantage. Sarjeant made the start in heat 10 holding off Lambert at the front who then retired but the Witches man couldn’t hold off Cook who rounded him on the final lap to take the win. It looked like being another 5-1 to the Panthers in heat 11 as Ostergaard and Lambert led for the home side but King passed Lambert on the back straight of the second lap before the captain then passed Ostergaard on turn four of the second lap to take the win. Kerr battled at the back but could not pass Lambert on the line. It was all over after heat 12 for the Witches though as Hansen took the win ahead of Risager who had passed Lambert in second but it wasn’t enough as the Witches trailed 45-29 with just three heats remaining.

The home side did not let up despite sealing the win as Cook flew from the gate in heat 13 and Ostergaard won a titanic battle with the Witches pair of Covatti and King to take second on the final lap and further increase their advantage. It didn’t stop there either as Lambert and Grondal eased to a 5-1 in heat 14 to increase the Witches pain. However, the Witches did record a 5-1 of their own in heat 15 as King and Covatti both passed Ostergaard but it was too little too late as the Panthers ran out 56-36 winners.

Team Manager Ritchie Hawkins was far from impressed with the performance labelling it the worst of the season.

“After our best performance of the season that was the worst,” said Hawkins. “The current form is not acceptable for an Ipswich side and as a team we have let our fans down tonight. Every rider needs to take it upon themselves to put it right.”