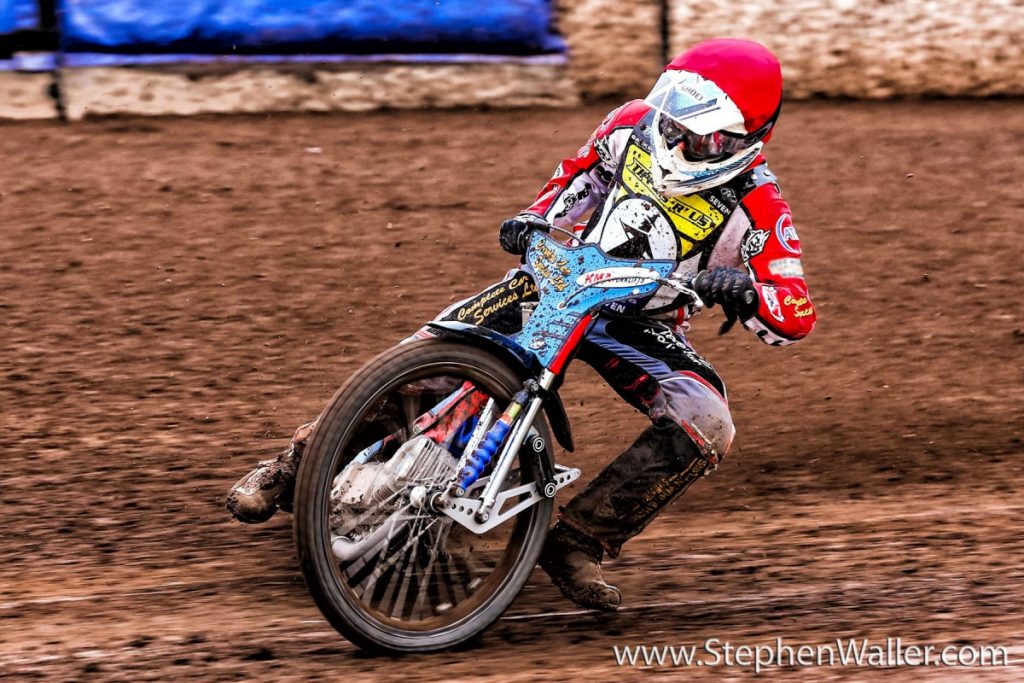 The ‘Tru7.com’ Witches put in a dominant display at Foxhall to batter the Berwick Bandits 58-34 on Thursday evening.

It was one way traffic throughout the meeting as the Witches controlled proceedings and the result was never in danger. Skipper Danny King reeled off another maximum scoring 12 from four rides.

Heat one took three attempts with the first attempt stopped after Theo Pijper’s helmet got caught in the tapes and in the re-run James Sarjeant was excluded for moving at the start. It was third time lucky though as King romped to victory with the quickest time of the season with Sarjeant’s replacement Joe Jacobs in third for a 4-2. Heat two was also stopped after Liam Carr fell on the fourth turn of lap one whilst in second. In the re-run Daniel Gappmaier held off Jacobs for the win in a shared heat. The Witches hit their first maximum of the night as Nico Covatti and Morten Risager eased to a 5-1 in heat three. Ben Barker won heat four with Connor Mountain in third for another Witches heat advantage making it 16-8 to the Witches.

Covatti and Risager were at it again in heat five easing to another 5-1 which forced the Bandtis to use their tactical ride in the following heat. Thomas Jorgensen was the man with the black and white helmet but the night got worse for the Bandits as he went through the tapes and was forced to go from 15 metres. In the re-run King and Sarjeant were looking good for a 5-1 before Sarjeant fell on the second turn and was excluded. King won the third attempt at the heat but it was a 5-3 to the Bandits with Jorgensen in second. The Witches continued to blow the opposition away in heat seven as Barker made his way round Pijper on the first bend of the second lap to join partner Jacobs at the front and the pair team rode to take the 5-1. Jacobs made the gate in heat eight but was passed by Kevin Doolan on the third bend of lap two as the heat was shared leaving the Witches 32-18 up.

It was three from three for Covatti and Risager in heat nine as they banged in another 5-1 before King won heat 10 for a 3-3. It was Jacobs’ turn to break the tapes in heat 11 as Jorgensen won the re-run with Doolan third for a rare Bandits heat advantage. Covatti made it four wins from four in heat 12 with the impressive Mountain in second for yet another 5-1 to the Witches. The 5-1’s kept on coming as King and Barker added their own in heat 13 and Risager and Jacobs added another in heat 14 to leave the Witches 57-29 up with one to race.

Covatti and Risager were sent out in heat 15 and Covatti was looking good to challenge early leader Doolan but his steel shoe became loose and ended the Italian’s chances of a maximum on the night as the Bandits ended the night with a 5-1. It was the Witches’ night though as they ran out 58-34 winners at Foxhall.

Team Manager Ritchie Hawkins was delighted to see his side get a comfortable home win.

“It was a pleasing result and I’m very pleased to get a dominant win because that is what we needed,” said Hawkins. “That’s two wins in a row and we will enjoy it tonight but it will be a tough one next week.”

Hawkins was pleased with the contribution from reserve pairing Jacobs and Mountain.

“Joe looked an accomplished rider and a very good Premier League reserve tonight and I thought Connor Mountain came in and did brilliantly. We got a lot of points from reserve and that’s obviously a massive bonus when all of your top four have got double figures.”

The boss knows the side now need to carry on this form for the rest of the month at Foxhall.

“I don’t think we can get carried away because we’ve had good meetings this season and not built on them but we need to get in the winning habit now and it would be nice to see the same next week!”

Tippers ‘R’ Us Rider of the Night: Ben Barker