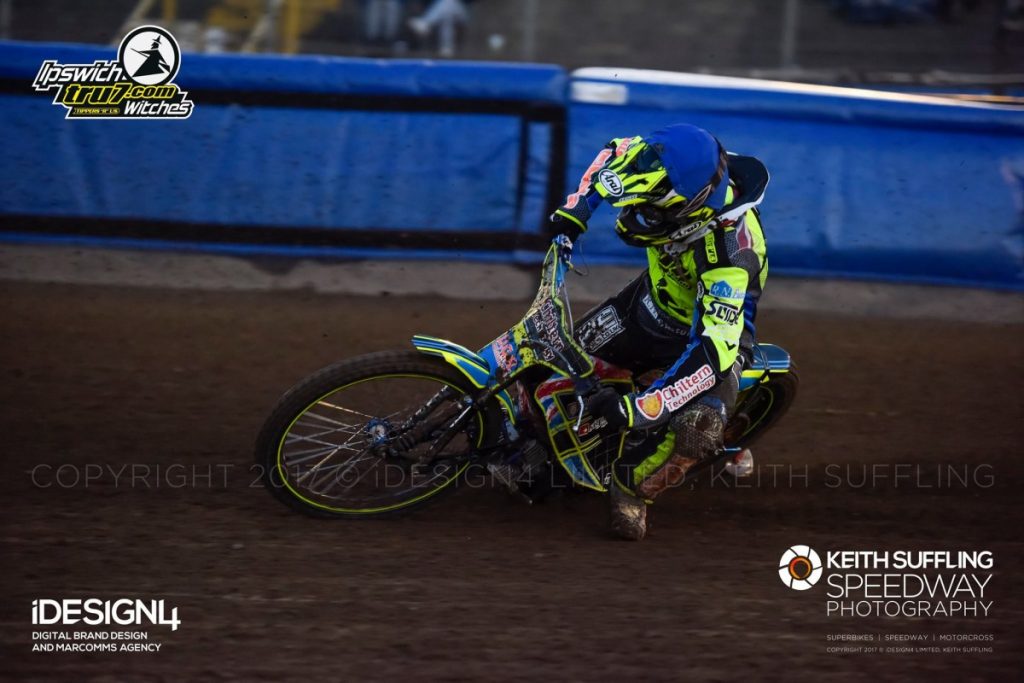 The ‘Tru7.com’ Witches produced a battling display despite going down to five riders at Newcastle before going down to a 52-38 defeat in the Championship.

Things started brightly for the Witches but they were hit by the withdrawal of guest Josh Bates who fell and suffered an injury after his first ride, leaving the visitors with just five riders. The away side battled on and kept things tight before fading away at the end of the meeting. Danny King top scored with 13+1.

The meeting started brightly for the Witches as the skipper King won heat one with James Sarjeant nipping into third for a 4-2. The Diamonds looked set for a heat two 5-1 as Danny Phillips and Connor Coles hit the front early on but Coles fell whilst in second and Phillips almost threw away the win with an error on the last lap but hung on as the points were shared. The home side did get their 5-1 in heat three as Ludvig Lindgren and Lewis Rose both passed King to lead as Bates fell whilst at the back. Rory Schlein hung on for the win in heat four but Mountain couldn’t hang onto third as the points were shared making the score 13-11 to the home side.

The Witches’ injury hit week continued as guest Bates withdrew from the meeting following his fall leaving the away side with just five riders. King won heat five in another 3-3 as the Witches hung in there. Schlein was a faller in heat six as Robert Lambert won the heat ahead of Hume for a 4-2 to the home side. Steve Worrall won heat seven as Hume pushed all the way in second with Schlein in third for a 3-3. Ashley Morris was a convincing winner in heat eight but partner Phillips was an early casualty in the race meaning another 3-3 to keep the Witches in the hunt at 26-22.

Hume was excluded from heat eight after running out of room in the first turn and falling but Schlein produced the goods in the re-run holding off the Diamonds pair to ensure a 3-3. However, the Diamonds took a big step towards sealing victory in heat 10 as both Sarjeant and Mountain fell and remounted leaving the home side to an easy 5-1. The Witches kept on battling though as Worrall won heat 11 with Sarjeant and King in third to prevent the Diamonds extending the lead. The Diamonds all but secured the win in heat 12 though with a 5-1 as Rose and Phillips beat the Ipswich reserve duo to make it 42-30 with three to go.

The meeting was sealed in heat 13 as Worrall won again ahead of King and Lambert went round Schlein to take third on the third lap for a 4-2. Lindgren won heat 14 but Mountain and Hume were both in the points for a 3-3. King won heat 15 as Schlein pulled up at the back making the final score 52-38 to the Diamonds, a battling performance from the depleted Witches side.