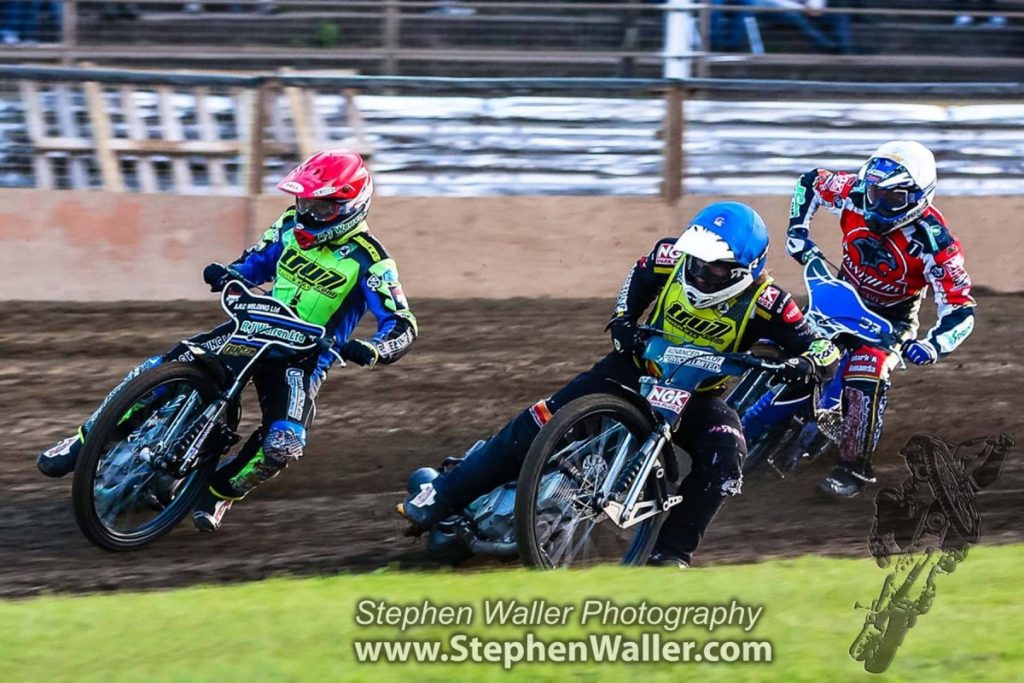 The ‘Tru7.com’ Witches produced a battling and spirited performance as they went down to a 47-43 defeat at Peterborough in the first leg of the Knockout Cup final on Sunday.

The Witches welcomed back Rory Schlein and Kyle Newman for the meeting but lost Schlein to injury as he fell in his first ride, with rider replacement already in operation it gave the visitors a mountain to climb. The home side took advantage and built a 14-point lead after nine heats and it looked like being a tough afternoon for the Suffolk side. However, as they have done all season, the Witches battled on and produced a fantastic end to the meeting to reduce the deficit to just four points heading into the second leg. Danny King top scored for Ipswich with 13.

Home guest Scott Nicholls took the win in heat one as King and Kyle Newman relegated Simon Lambert to the back for a 3-3 to open proceedings. Heat two was stopped after Connor Mountain fell on the third bend of the opening lap and he was excluded from the re-run. There was more trouble for the Witches as Nathan Greaves’ bike packed up ahead of the re-run and he was excluded for not making the two minutes and would go off 15 metres at the third attempt. Despite Greaves’ best efforts he couldn’t prevent a 5-1 to the home side. The away side produced the perfect response in heat three as Cameron Heeps and Newman hit a 5-1 to level the scores straight away. Heat four was called to a halt after Rory Schlein fell on the first lap. The ambulance was called onto the track and Schlein was subsequently withdrawn from the rest of the meeting leaving the Suffolk side with it all to do with rider replacement already in operation for Justin Sedgmen. Chris Harris won the re-run ahead of Mountain with Scott Campos third for a 4-2 to give the hosts a 13-11 lead.

Ulrich Ostergaard saw off King to win heat five with Paul Starke putting the pressure on in third, giving the home side a 4-2. Lambert and Nicholls hit a 5-1 in heat six to extend the home side’s lead. Harris was a winner again in heat seven as Heeps and Newman were both in the points for a 3-3. Starke won heat eight after a fierce battle with Heeps on the opening lap with Lambert third for a heat advantage to the Panthers to make it 29-19 to the hosts.

Starke was back out in heat nine and won again with captain Ostergaard second for a maximum heat advantage. Heat 10 was called back with Newman warned ahead of the re-run. Nicholls won the re-run after a tight opening lap with Heeps with Newman third for a 3-3. The away side got themselves back into the tie in heat 11 with a 5-1 as King won and Greaves produced a stunning ride to hold off Harris on a run to the line. The Witches fightback continued in heat 12 as Heeps beat Starke and Mountain picked up third for a 4-2 to make it 40-32 to the home side.

Heat 13 was stopped as Greaves fell and his bike cleared the fence. The Witches man walked away but was excluded from the re-run. King handled the pressure in the re-run as he won for a shared heat. The strong end to the meeting continued in heat 14 as Newman won and Mountain claimed second for a 5-1 that reduced the home side’s lead to just four points. King comfortably won heat 15 as it ended in a shared heat that gave the home side a 47-43 win heading into the second leg at Foxhall on Thursday.

The second leg of the Knockout Cup final takes place at Foxhall on Thursday 26 October. Kids go free to this meeting.