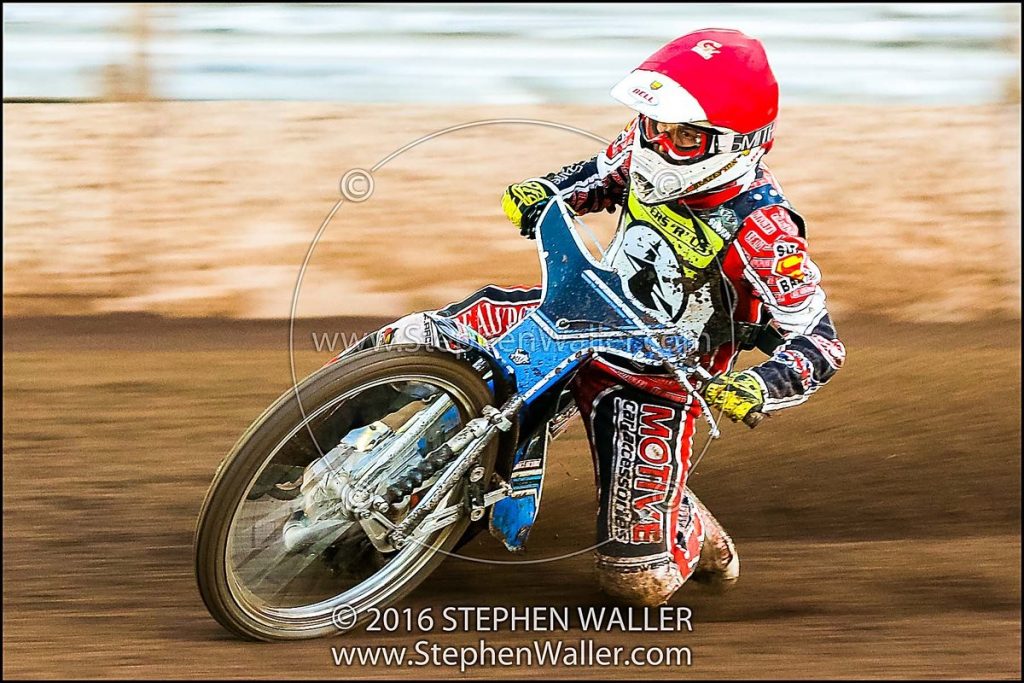 The ‘Tru7.com’ Witches put in another dominant performance at Foxhall on Thursday to hammer the Plymouth Devils 61-29 in the Premier League.

Similarly to the two previous meetings at Foxhall it was one-way traffic throughout with the Witches winning every heat on the night as Ben Barker recorded a paid maximum of 14+1.

It was a delayed start to the meeting after track work needed to be done following a heavy shower but the delay didn’t affect Danny King who stormed to victory in heat one as the points were shared. Heat two was action packed as Danyon Hume and Joe Jacobs gated on a 5-1 with Leigh Lanham left at the start but Hume fell whilst leading on the second bend of the third lap but managed to get back up and claim a point for a 4-2 to the Witches. Nico Covatti and Morten Risager hit the first maximum of the night in heat three before Hume was down again in heat four in a more serious incident this time. The young Witches rider clipped the back wheel of the visiting rider and hit the track hard, suffering a blow to the ribs that the paramedics took their time to assess before the re-run. Jacobs replaced Hume as Barker swooped round Jack Holder at the start of lap two for the win in a shared heat that left the Witches 15-9 up.

Risager won heat five with Covatti in third for another heat advantage to the Witches. Similarly to the previous two weeks the Witches were blowing the opposition away and recorded a 5-1 in heat six thanks to King and James Sarjeant. Barker won heat seven but it was the battle for second that caught the attention as Jacobs and Kyle Newman fought it out for second with the Devils man coming out on top to limit the damage to a 4-2. With Hume withdrawn from the meeting Jacobs took his place in heat eight as Newman was sent out on a tactical ride. However, the tactical would prove fruitless as Sarjeant gated before Newman took the lead coming out of the second bend. The Witches man kept plugging away though and passed Newman at the start of the third lap with the Devils man falling resulting in a 4-2 to the Witches that meant the score stood at 32-16.

It was one-way traffic yet again in heat nine as Covatti and Risager recorded another maximum and it was another heat advantage as King’s fantastic Foxhall form continued with another win in heat 10 with Sarjeant in third for a 4-2. The Witches maintained their 100% record of heat winners on the night in heat 11 as Barker swooped again this time to pass Rohan Tungate coming out of the second bend in a shared heat that was awarded after Jacobs fell on the final lap. The total domination continued in heat 12 as Covatti won with Jacobs third making it 48-24 to the Witches.

The Witches didn’t let up and King completed another maximum in heat 13, his fourth on the trot at Foxhall with Barker in second for another 5-1. It was more of the same in heat 14 as Risager completed his paid maximum from his four programmed rides in heat 14 with a win with Jacobs in second for yet another 5-1 to the Witches.

Barker completed his paid maximum in heat 15 as he once again rounded everyone on the second bend to win and give the Witches a 61-29 win.

Team Manager Ritchie Hawkins praised the track staff and said he team won the mental battle on the night.

“There was a big shower in the afternoon and the track staff did brilliantly to get the track back into ride able conditions,” said Hawkins. “I think the Plymouth riders walked the track and weren’t very happy about riding, their heads had gone. None of my boys complained once and I think mentally we’d won the meeting there. We needed to be ruthless and we were.”

The Witches won all 15 heats on the night and Hawkins said it was a complete team performance.

“It’s very rare that happens if at all! It shows how dominant we were. We’re obviously very strong in the heat leader positions but the reserves were strong too and we backed them up well so what could have been a tough meeting turned out to be a comfy night.”

The boss provided an update on the injured Danyon Hume and sent his best wishes to Connor Mountain after it was confirmed that suffered a broken back in a crash at Birmingham on Wednesday.

“The early diagnosis is that Danyon has cracked a couple of ribs so we’ve got to wait for the hospital reports on that. He was winning heat two and got a bit excited and slipped off and then he made a mistake in heat four in the first bend and it’s one of those things.

“It was gutting to hear the news on Connor and I wish him a quick recovery. He’s had a very good season and hopefully he’ll be back on a bike soon.

“We’ve been looking at both of them for the number seven position but now they are both on the injury list, so we have got to look for someone else now.”

Hawkins now wants his side to carry on their good form away from home when they visit Sheffield next week.

“Our home form has pulled us into a good run but we’ve got to win some away matches and we haven’t got many left so we’ve got to go to Sheffield and get a win. We need to win a couple away from home to make the play-offs.”

Next Meeting: PL 4th August vs Sheffield (away)