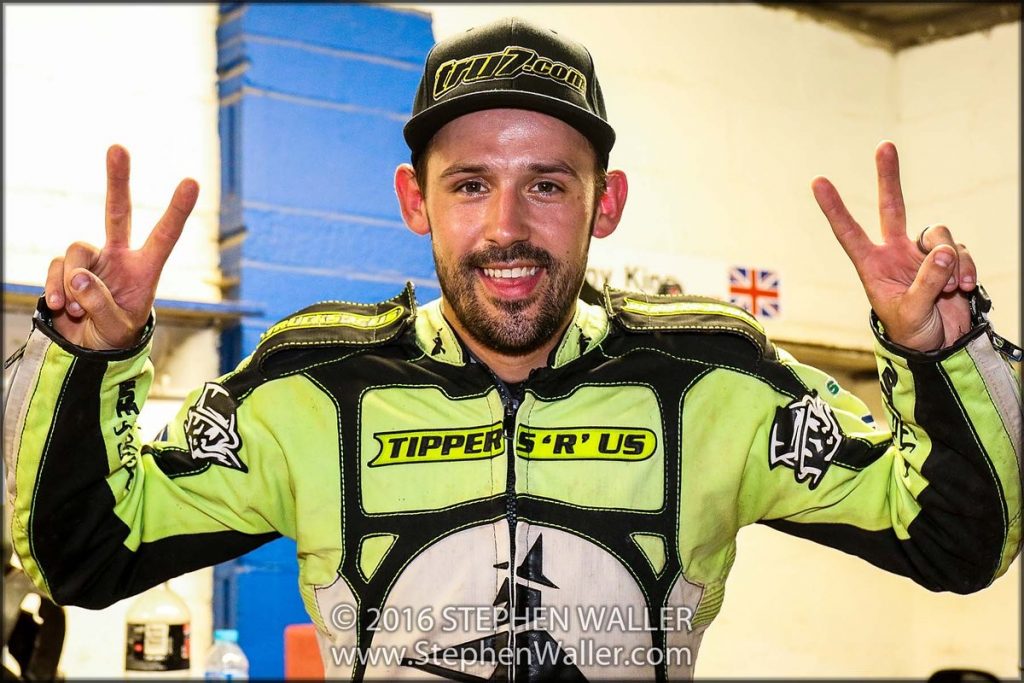 The Monarchs ran out 53-37 winners at Armadale on Friday night but it wasn’t enough to win on aggregate after the Witches had built up a 26 point from the first leg. Danny King top scored with 10+1 on the night and the Suffolk side will now face Somerset Rebels in the Semi-Final.

In very wet conditions the captain was first out of the gate and got the Witches settled into the meeting with a heat win ahead of the Monarchs pair. Joe Jacobs and Connor Coles were first out of the gate in heat two but Coles fell in the wet conditions on the third turn before Max Clegg passed Jacobs going into the second lap for a 4-2 to the home side. The Riss brothers were comfortable in heat three and hit the first maximum of the night as the visitors struggled to adapt to the early conditions. Coles suffered bike problems at the start line in heat two and was excluded for not making the two minutes and was forced to go from 15 metres in the re-run. Kevin Wolbert won at the second attempt ahead of Ben Barker with Ben Hopwood in third for a another 4-2 to make it 16-8 to the home side.

King was again quickest from the start in heat five and bagged another three points for the Witches. The home side were fired up though and hit another 5-1 in heat six thanks to Ryan Fisher and Sam Masters despite Barker’s best efforts in third. However, the visitors came to life in heat seven as Morten Risager and Nico Covatti responded in style with a 5-1 of their own to stem the tide. Fisher made the gate in heat eight but James Sarjeant rode fantastically to hunt the American down and pass him on the final lap to take the win for the Witches making the score 28-20 to the home side.

The Monarchs increased the lead in heat nine as Erik Riss won but Barker worked his way into second to prevent a 5-1 with Mark Riss in third. The home side did hit a maximum in heat 10 though as Masters and Fisher held off Risager to ramp up the pressure on the away side. However, once again the Witches had the answer in heat 11 as Sarjeant won with partner King in second for a crucial maximum to put the away side on the brink of qualification. And progress to the Semi-Final was complete in the following heat as Covatti won heat 12 making it impossible for the home side to catch the Witches on aggregate despite leading 41-31.

Masters won heat 13 but King passed Wolbert for second on the fourth bend of the first lap as Barker fell at the back resulting in a 4-2 to the home side. Mark Riss won heat 14 ahead of Risager as Clegg picked up third for another 4-2. Erik Riss won the final heat despite Covatti throwing everything at the home rider but Sarjeant was a faller at the back and the race was awarded meaning the Monarchs took a 53-37 win but it is the Witches that progress to the Semi-Final to face Somerset winning 95-85 on aggregate.

Team Manager Ritchie Hawkins praised skipper King’s display on the night and felt his side put in a professional performance.

“It was a professional performance on a tricky night led by Danny who was superb really,” said Hawkins. “They started better which I think boosted their morale but when we needed to we stepped it up another level. I always thought we had a lot more left in the tank and we used it when we needed to.”

Hawkins says the team are thriving under the pressure and was pleased with the character his side showed.

“I think in the past Ipswich teams I have been involved in have cracked under the pressure but we seem to have a new found mental strength and are thriving under the pressure and are stepping up to the task. I think we are using it as a positive rather than a negative when we need to get a result.”

The boss thanked guest Coles for his role in the side’s success and says confidence is high going into the Somerset clash.

“Connor rode over both legs and played a big part in our success and we thank him for his commitment to the team.

Next Meeting: PLPO 7th October vs Somerset (away)